Words With Friends, The Best Misogynistic Game Around!

Sorry folks, but we need a couple more days to tally the votes for the Craft Whores contest. This is our first link-up partay, and the judging has turned out to be a little more challenging than we thought it would be!

As a consolation prize while you wait, let’s talk about Words With Friends.

It’s the Scrabble knock-off that’s one of the hottest games on the Internet these days.

I play every day. It’s how I keep my brain so sharp. (Where are my fucking keys?! Dammit!)

And one thing I’ve noticed is that this game is totally misogynistic.

How else do you explain that vagina-related words like queef, cunt, and clit are unacceptable words but dong, balls, fart, and wang are fine?

Look, I’m not making this up. Here’s a screen shot from one of my recent games: 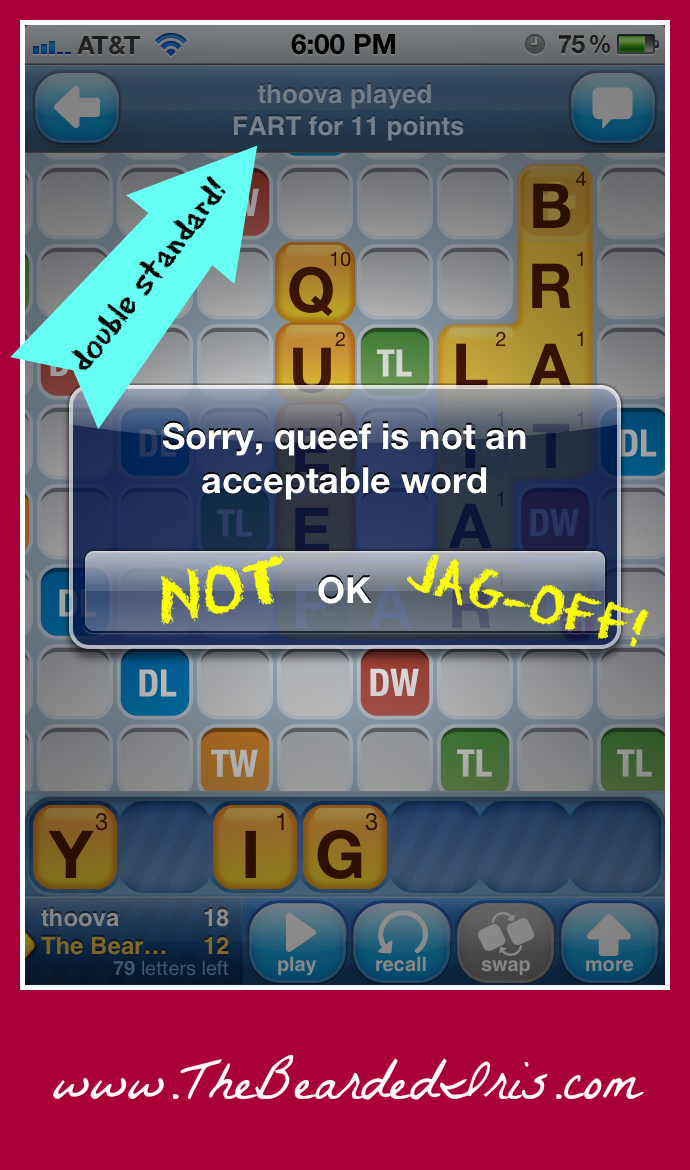 The hell? My opponent, thoova, played the word FART, and then when I tried to play the female equivalent, I was DENIED. Total double standard.

So annoying. Good Q words are hard to come by.

At least TWAT is an acceptable word. Score one for the pink team.

Anyhooo. These are things my WWF comrades and I complain about on the Twitter in between moves.

And that’s where you can usually find me during coffee breaks in the morning and commercial breaks at night. My username is “The Bearded Iris” if you’re looking for a WWF partner with the sense of humor of a 12-year-old boy.

More soon on the Craft Whores contest. Damn, if y’all hadn’t linked up such awesome crafts, this would have been so much easier to judge. I blame you and your vagtastic crafts, really.

Today’s edition of Just the Tip Tuesday is a triple header!

2.) Always look in the bowl before you sit down on the toilet.

3.) A plastic milk jug can be fashioned into a very handy makeshift disposable scoop.

Surely you are now on the edge of your seat, eagerly awaiting more details about how these three tips are related. Just make sure it is not the edge of a toilet seat. Because after you read this, you’re not going to want to hold court on the porcelain throne any longer than necessary. In fact, Uncle John, I am going to just go ahead and prescribe you an extra large dose of daily Benefiber so you can speed up your daily doody time and greatly reduce your risk of having your butt bitten by a panicking squirrel.

Look, I don’t make this stuff up. I swear. It just finds me. And I love it. My life just wouldn’t be the same if I didn’t regularly enjoy email exchanges like this:

Kristen: “Soooooooo….. guess what happened to me today??? Dead animal in my mother fucking toilet. A little squirrel. Stiff. In my terlet. I’m so freaked out…I thought I’d share that with you.”

Kristen: “I don’t know how it got IN there… I had gone in earlier to make a deposit, and half an hour later Jack went in to pee and found the little fucker…dead and stiff in there. ‘Mom, There’s somfin’ in the toilet, you gotta see it!’ That’s never a good way to start a sentence. But, I made a scoop out of a milk jug, and scooped the fucker out and threw it in the woods… where it hit a tree and bounced into my creek. And then I poured a gallon of bleach in my toilet.”

Iris: “Well there, that sounds like a perfect ‘Just the Tip Tuesday’ column if I ever heard one! ‘How to properly dispose of a dead squirrel in yer terlet.’ – a guest post by Kristen.”

Kristen: “LOL Dude…. now that it’s out of my house, and I’ve had 3 dranks… I can laugh at it. Only I would have an already dead varmint in my terlet.” 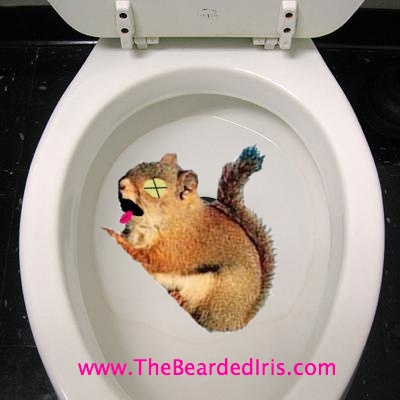 And so that was the end of that. Or so I thought.

By the way, she wasn’t speaking in code. “Dead squirrel in my toilet” is not a euphemism for poop, like “Chattahoochee Brown Trout” or “Taking the Browns to the Super Bowl.” She was really talking about a squirrel…a real squirrel…dead…in her toilet.

And I couldn’t stop thinking about it. Which lead to more questions.

How in the hell do you get a squirrelly in your swirly?

How did it die?

What would have happened if it wasn’t already dead when her kid went in there to pee?!

And OMG, what is Kristen feeding her kids?

I just had to know more. So I looked it up. I Googled “squirrel in my toilet,” to be exact.

And it turns out it’s not that uncommon.

Kristen honey, don’t feel bad, it’s not only you who gets a varmint in your toilet. Actually, you are lucky he was dead. It could have been way worse.

Check out this 911 call in Oklahoma.

There’s even a collection of short stories by a woman named Rebecca Cooper titled “There’s a Squirrel in My Toilet.”

So how DID Mr. Squirrel get in there? That’s what I want to know!

It’s unlikely that my friend Kristen is feeding her kids squirrel. (That bitch is crazy, but not “Squirrel-Taco-Tuesday-Crazy.”) And even if she is, odds are pretty low that one of the kids could swallow, digest, and poop out a whole squirrel, even a whole baby squirrel.

And the lid was closed, so he didn’t jump in there himself and close the lid, a la “hide and seek, you can’t find me!” style, most likely.

Best I can figure, squirrels get into toilets via the drain-waste-vents (DWV) found on roofs. According to Wikipedia, the purpose of the pipes, sometimes known as stink pipes, or in Kristen’s house: stank pipes, is to release the natural gases that build up in plumbing systems. Unfortunately, it appears as though those pipes don’t usually have a baffle on them to keep out wildlife.

That means the poor little curious baby squirrel was probably frolicking on Kristen’s roof, possibly playing hopscotch and/or singing a verse of Little Bunny Foo-Foo, when he came upon one of the aforementioned stink pipe. “Wow – neato!” may have been the last thought on his juvenile rodent mind when he lost his footing and plummeted three stories down to the bottom of the pipe. Kind of like the squirrel version of Baby Jessica Stuck in the Well. Somehow though, the squirrel managed to maneuver its way through the S-curved pipe at the bottom of that stink pipe and into the toilet bowl.

Good Lord, that poor baby squirrel! Kinda reminds me of that scene in Shawshank Redemption. You know the one:

“Andy crawled to freedom through five hundred yards of shit smelling foulness I can’t even imagine, or maybe I just don’t want to.”

Only poor little Squirrelly didn’t crawl to freedom. Oh no. He crawled to his death by drowning in a closed toilet bowl…a tomb of unspeakable horrors.

Which sucks for him, but works out nicely for us humans who probably don’t want lost, terrified, feces smeared squirrels running amok in our homes. Most of us anyway, unless you’re one of those freaky animal hoarders, in which case, put some nuts on your roof and leave your toilet lids up and maybe you’ll score some extra furry friends.

I’m just glad for Kristen it was a baby squirrel and not a roof rat. Those bastards can swim. Or so I’ve heard.

So keep a lid on it, guys. You never know what’s gonna show up in your can. You know, now that I say it, that’s probably a universal truth. Look for t-shirts and bumper stickers in the near future.

And if something unwanted does make an appearance, try Kristen’s Hand-Crafted Milk Jug Scoop-and-Toss. Wish I had thought of that the day Nature Boy clogged and filled my powder room sink to the rim with regurgitated double cheeseburger and onion ring jamboree. Sheesh.

P.S. – A vote for The Bearded Iris is a vote for squirrel-free toilets everywhere! Please help other fun people find me by casting your vote…for me…The Bearded Iris…at Babble.com’s list of the Top 50 Mom Blogs of 2010. I’m currently hovering around #21. Thank you!