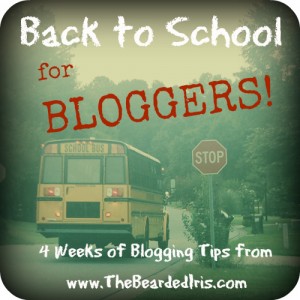 Today’s tips are all about Twitter. Whether you’re relatively new to Twitter and struggling to figure it out, or you’re a veteran and think you know it all, there is probably a tip in today’s post you can use. So stick around!

First, let me just confess, I truly hated Twitter when I began using it 4+ years ago. I mean really hated it. It was like a foreign language to me. And me no speakie nothin’ but good ol’ American, and in a Pittsburghese dialect to boot. So there.

But the more I used it, the faster it became my favorite social media platform. And then I got so good at it that I “earned” a butt-load of free high value Old El Paso coupons just for tweeting free sex to the head of General Mills! Skillz, people. That takes mad skillz.

And you too can earn free coupons for a lifetime supply of broken taco shells if you enroll in my trademark pending e-course: “Tweet Like a Ho-Bag in Five Easy Steps.”

I also Tweet to interact with interesting people I probably wouldn’t otherwise know, like famous authors, newspaper columnists, and kitchen and bath design experts who can give me faucet installation tips and make me laugh at the same time. 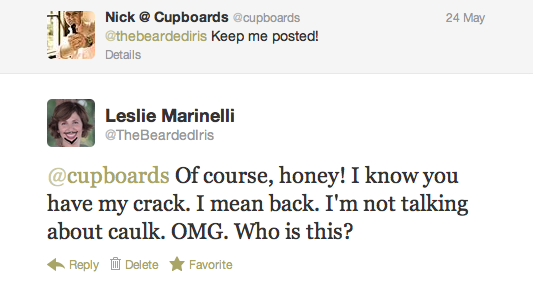 I mean, come on. Where else can I have conversations like that, in public, without being arrested or fired? I heart Twitter so hard. I really do.

First up, let’s just explain some of those pesky abbreviations you see all the time in Twitter, because I once jokingly told HotMessMom.com that #FF meant “fuck a frog” and the next thing I knew she was tweeting photos like this: 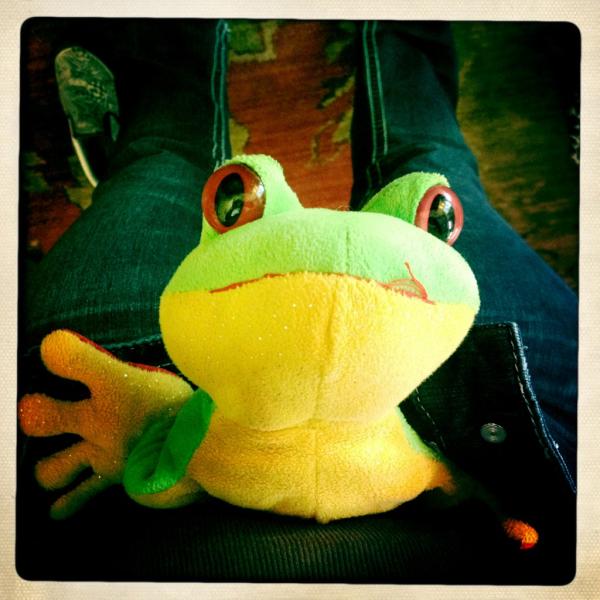 Actual #FF photo tweeted by @HotMessMomCom. No live frogs were hurt in the making of that tweet.

That girl is more fun than a front pocket full of peanut butter at the dog park.

FF = Follow Friday, one way to spread the love on Twitter, by recommending someone you think your followers would also enjoy following.

DM = direct message, like a private email, but less than 140 characters 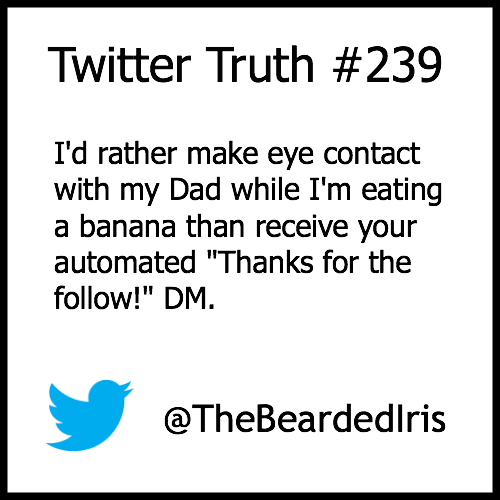 Speaking of DMs, you probably see a lot of people who send out automated DMs when you follow them. They usually say things like “Thanks for the follow! For more of my awesomeness, read my free e-book, How to Be a Huge Douchebag on Twitter!”

Please don’t set up automated DMs. It makes you look like a cheese ball, and not in a good way.

Looking to maximize the visibility of your tweet and gain new followers? Add a good hashtag!

Hashtags make the topic of your tweet more easily searchable. When I was tweeting about the Emmys the other night, I was sure to include the hashtag #Emmys or #Emmysmack so that anyone following that hashtag would have my tweets show up in their search, even if they aren’t my followers.

All Tom Beringer needed was an empty chair. #EmmySmack

Only time for one more Twitter Truth, and I’ve saved the best for last!

If you want your tweet to be seen by the most people possible, don’t start it with the “@” symbol.

I’ve written about this extensively here, but in a nutshell, when you start a tweet with an @, that tweet will only show up in the feeds of people who follow BOTH you and the person you are “@ mentioning” at the beginning of that tweet.

I know. This one is a little tricky.

And listen, sometimes you don’t want to clog up all your followers’ feeds with the details of a back and forth conversation you’re having with one person (see crack/caulk convo with Nick above). That’s when a quick reply that begins with @ is a good thing.

This is a good example of how to tweet a link:

I FRICKING LOVE this by @motherhoodwtf: And They Say Romance is Dead http://t.co/U4QjPkYQ

It would show up in the feeds of all 2158 of my followers. Actually, it would have been even better if I had added the hashtag #marriage and/or #romance to increase visibility to people outside of my reach!

But this next tweet is an example of what NOT to do:

@motherhoodwtf’s post: “And They Say Romance is Dead” [link] rocked my world. I am crushing on her husband big time!

That would only show up in the feeds of people who are following both me and @motherhoodwtf. That’s only 186 people, as opposed to all 2158 of my followers who might not all know the fabulousness that is Allison of MotherhoodWTF.

By the way, I found that number using Twiangulate, a very cool way to find new people to follow and extend your Twitter reach. Check it out! 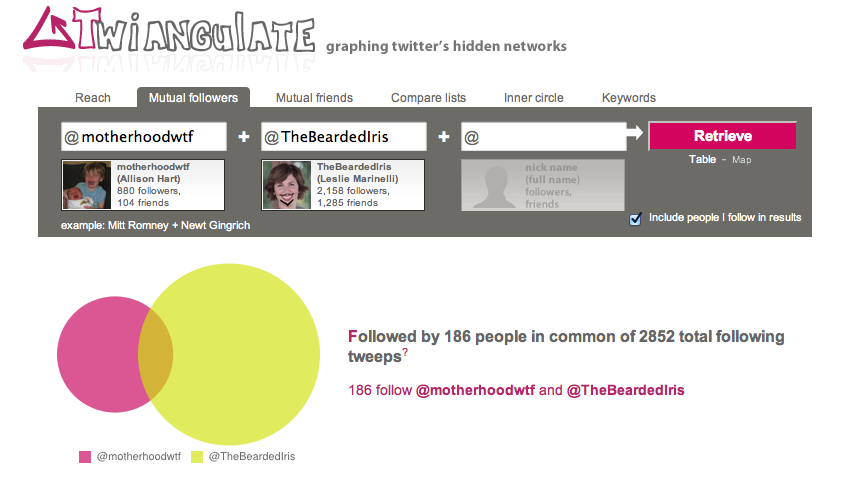 In that handy dandy Venn diagram above, wouldn’t Allison rather have all my peeps in the yellow circle see my tweet about her post than just the tiny sliver in the middle of our mutual followers?

Yes. She would. And luckily for her, I know how to tweet for maximum visibility. And now, so do you! Yay! Group hug, bitches.

And that’s all we have time for today. Please leave me a comment below if there are any other burning Twitter questions you’d like me address in a future post. If I don’t know the answer, I’ll find it. Hey, anything to avoid housework.

Thanks for being here!