OMG. What have I done? 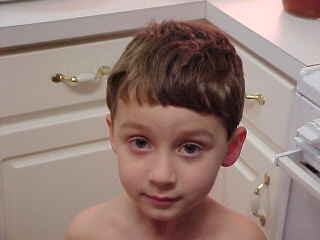 Nature Boy, age 4, the first and last time I ever cut his hair.

…and that is paying someone else to give your child a bad haircut. 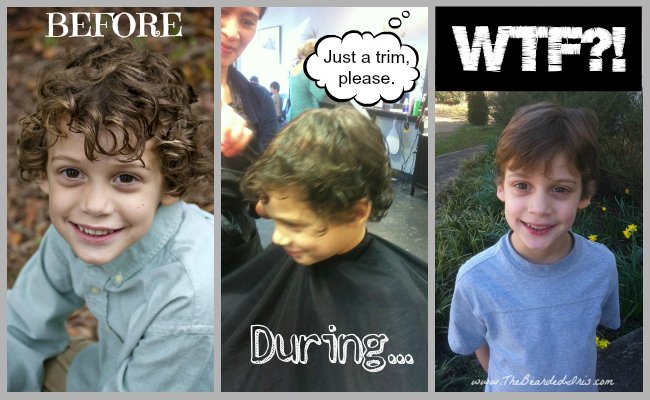 I already know. Believe me. I know.

Even The Gatekeeper, who is truly the most stoic and level-headed of any man I know, was PISSED when he saw what that woman did to our little boy.

“Were you on your phone?! How could you not notice what she was doing?”

“No! (Maybe.) I was right there! I couldn’t tell she was going so short! And then when she started to blow it out, I just figured we could fluff it up again when we got home. I had no idea.”

I specifically asked her for a trim. I only wanted a trim. And she was the one who gave him his very first haircut several years ago. 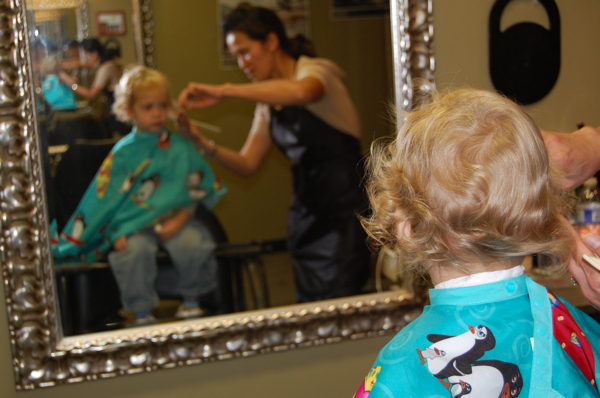 So what if English isn’t her native language! It’s just a trim. What could go wrong? (Famous. Last. Words.)

But when she brought him over to the cash register she said, “His hair very stubborn (sic), but I cut all the curl out for you.”

OMG. She thought she was doing me a favor…like curls were the mark of the debil.

Y’all…I have cried real tears over this. Don’t worry, never in front of him. I put on my bravest face and told him how grown-up he looked. I even secretly called his Kindergarten teacher to give her a heads-up so she wouldn’t freak the freak out when she saw him.

But my baby. My curly headed little cherub. His shining glory scattered across the barber shop linoleum.

I feel like I’ve slapped baby Jesus across the face.

It’s just hair. It will grow. At least that’s what I keep telling myself. But you see, there is a legend in my family of the time my mother cut my cousin Matt’s baby curls off and they never returned. I’m pretty sure my Aunt Debbie has never forgiven her sister for that.

And so I wait. And I pray that Bucket Head’s curls will return.

And they probably will. He’s almost six-years-old, after all. These aren’t just baby curls.

But the saddest part? (to me, anyway)… 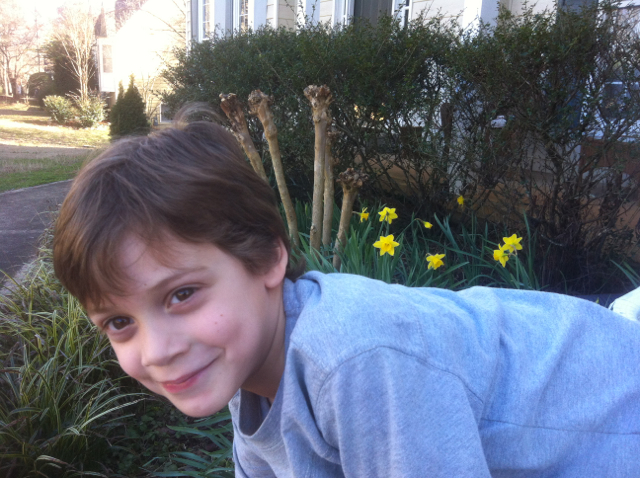 He asked us to buy him a comb…his very own comb. He’s never owned one before.

And we keep catching him in the mirror, combing his hair flat as a board. It’s painful to watch.

It’s actually feathered, and a little long in back. Sometimes, in certain light, he reminds me of a mini Larry Wilcox from CHiPs. 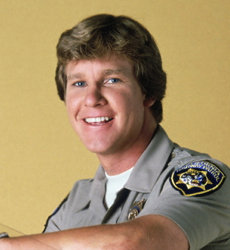 I had to bite my lip to keep from laugh-crying.

“NO. I hate my curls. I hate the way people are always touching my head. I want to look like all the other boys.”

It breaks a mama’s heart, I tell you. To hear your child “hate” an integral part of their being. 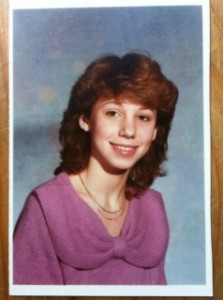 But I feel like I have to let him explore his new look…just like my mother let me experiment with Sun-In and She-Mullets.

Of course, I was twelve, not five! I thought I had more time.

So we help Bucket Head comb his hair flat and I try my best to not touch it, even though it pains me to keep my hands to myself.

I can only wait and wonder. Will he come around? Will he learn to love his curls someday? Or will the desire to conform stifle his ability to see how perfect he already is, exactly the way God made him?

It is only hair.

Please. Save me from myself. Assuage my guilt. Tell me about the time you accidentally slammed your child’s hand in the door or Sharpied Groucho Marx eyebrows on your kid because you thought for sure they would fade away before school picture day. Tell me something. Anything, really.

How to Revive Your Child’s Limp Curls

In honor of relaunching The Bearded Iris, I would like to re-institute my “Just the Tip Tuesday” column. In the past, I’ve shared tips on a variety of things like how to stay on track with an antibiotics schedule, how to harmlessly carry an uncooperative toddler with one hand, and how to naturally combat Seasonal Affect Disorder. This year, I’m hoping to widen my range of useful tips and prove just what a helpful Jill of All Trades I truly am. Like the MacGyver of Motherhood, I’m going to use a Bandaid and a wad of ABC gum to unclog a drain, balance your checkbook, and entertain your children at the same time. And if I can’t pull that off, I’ll at least have fun trying (and hopefully so will you). So let’s get to it, shall we?

My youngest son, Bucket Head, has an absolutely glorious head of blond curly hair that makes women of all ages swoon.

If you sneak up from behind him and gently pull and release one of his many ringlets, you can actually hear it go “BOI-YOI-YOI-YOI-YOING!” Don’t let him catch you though, or he’ll give you a look like this:

So worth it, though.

This is the kind of hair that people in public reach out and touch. Older women in particular seem to get sucked into some kind of gravitational force that propels their hands toward his head. I cannot blame them as I share their inability to control the hands whenever I’m within 25 feet of this child… hence the constantly tousled look. Nobody in my family seems to know where he got this hair, but they all agree that the mustache comes from his mama.

The hair is particularly shocking to us all because he was SO bald for such a long time as a baby.

That shot was taken when he was about 5 months old. My dad later told me that he was SO relieved when Bucket Head finally grew some hair because it made him look “less like an alien.”

The man had a point there.

When the hair did start to grow, it was pretty typical baby hair… fine and wispy.

Of course Laura took that picture. Damn, that girl has skills.

Fine wispy hair doesn’t do much to keep a baby’s head warm. That’s why most mothers keep cute little hats on their babies all the time. If you don’t have a hat on hand, I’m here to tell you that a pencil case will work just fine.

Also, buckets are warm, waterproof, inexpensive, and great for protecting those soft keppies from all the sharp corners of the world.

But back to the hair.

This poor child was a cue-ball until well after his first birthday. However, when his hair finally did start to grow, it burst onto the scene like a pimple on prom night, practically shouting “LOOKIE HERE, PEOPLE!”

I call this look “The Cockatiel.” It always got us a lot of sympathetic stares at the grocery store. Especially when it was combined with the runny nose and the jelly face.

And that’s pretty much what he looked like until he was 2 and 1/2 years old and I finally took him for his first haircut.

I had gotten really tired of strangers mistaking him for a little girl. Imagine what they would have thought if they saw the kind of outfits this kid was putting together at home…

He likes to play dress up with his big sister. So what?!

But again, I digress. My point is that this boy has some seriously cute and curly hair these days.

Which brings me (finally) to my tip…

Remember the other day when I posted a picture of Bucket Head drinking a green smoothie?

Notice the lack of spring in his curls?

Apparently, that is the result of going too long between shampoos, according to one of my favorite aunties who immediately emailed me to “WASH THAT CHILD’S HAIR.”

Thus, my friends, I am sharing with you my new found knowledge, that indeed, all it takes is a little shampoo, warm water, some elbow grease, a few dry towels, the ability to wrestle a greased pig, some Bandaids, 4 extra strength Advil, and a lollipop, and you too can revive your child’s limp curls. It’s as easy as that.

A happy, springy, and fresh smelling Tuesday to you all!