I listened to my mother.

Last April I had the privilege of participating in a national show called “Listen To Your Mother.” Being chosen for the inaugural Atlanta cast and getting to perform one of my original pieces in front of a live audience on stage in a beautiful theater was a dream come true and I’ve been anxiously awaiting the day when I could share it with you…and see it myself.

(Emphasis on the word anxiously. Oy.)

Well the videos were released last week…aaaand now I remember why I specifically chose to NOT have my wedding video taped.

But I learned A LOT about myself and THE THEATAH throughout this process. For instance, when you’re on stage, you shouldn’t clap with your hands in front of your face. (One of these things is not like the other.)

Also, when your hands are not in front of your face, maybe oh—I don’t know—pretend like your face is made of human flesh instead of Silly Putty. 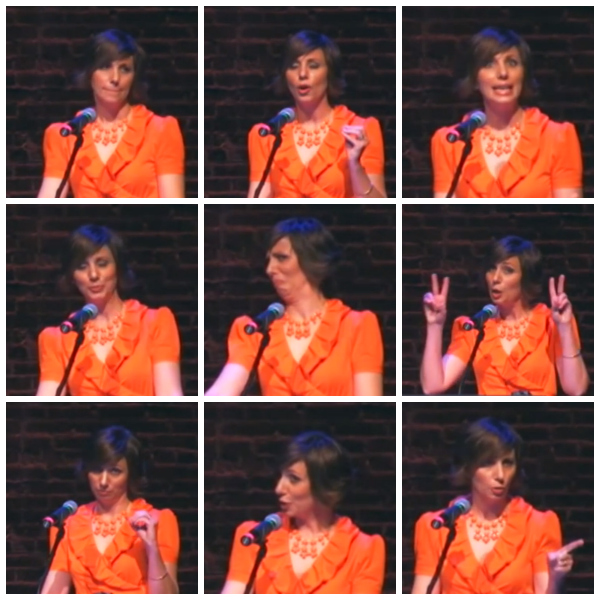 I swear, the only thing missing from this performance is me saying, “Wokka wokka!”

Twenty-six years later, I finally understand why Mr. Altman cast me in the school play my senior year as the dead bank robber wearing a ski mask.

But all’s well that ends well, I say. I did not vomit on stage, fall down in my heels, or have a nip slip. Therefore, in the words of my new Taekwondo instructor, “TWO CLAPS—SUCCESS!”

(And that’s a story for another day, but yes, I just started taking Taekwondo and am now an official white belt. Shit just got real, bitches.)

If you weren’t able to come to the show and would like to see my performance, here you go.

(If you can’t see the video embedded here, this link will take you to it on YouTube.)

Many thanks to Jana Anthoine and Miranda Wicker for the incredible amount of work and dedication it took to coordinate, direct, and produce this event, and to Ann Imig for creating such a wonderful platform for women to share their stories of motherhood nationwide. (To see the entire 2014 playlist from all 32 Listen To Your Mother Show cities, click here.)

Most of all, thank you to my own children for being so damn funny and giving me so much material to write about. And to my husband for tolerating me even though I clearly “jumped the shark” about 26 years ago.

I’m going to listen to my mother, for once.

The Picture That Cost Me 1.3 Million Dollars