Press Release: The Bearded Iris acquires In the Powder Room

A property of PRG Media, Inc., ITPR has been entertaining women with its bold, brave honesty and humor since its launch in 2009 by founders John O. Morisano and Diane Hayman. Morisano and Hayman will both take seats on Marinelli’s Board of Advisors.

Marinelli, the writer behind the riotous blog The Bearded Iris: A Recalcitrant Wife andMother Tells All, has been lauded by CNN’s HLNtv.com, Parenting Magazine, The Huffington Post, BlogHer, Erma Bombeck Writers’ Workshop, and Babble.com. She joined ITPR in October of 2011 as a weekly columnist and worked her way up the ranks until she took the reins as U.S. Editor in April of 2012 and then as Editor-in-Chief in August of 2012.

Under her leadership the company released its first humor anthology for women, “You Have Lipstick on Your Teeth” and Other Things You’ll Only Hear from Your Friends In The Powder Room, in August of 2013. Marinelli is both a co-author and the editor of this collection, which features original short stories about a variety of womanhood-related topics by 40 popular bloggers from the U.S., Canada, and the United Kingdom. 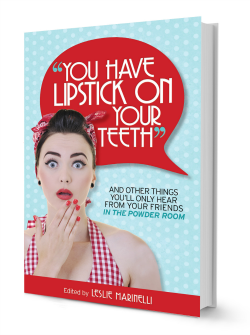 Upon its release, “You Have Lipstick on Your Teeth” became a top-rated and best-selling book on Amazon. According to New York Times Bestseller Robin O’Bryant, author of Ketchup is a Vegetable and Other Lies Moms Tell Themselves, “It takes a lot to make me laugh out loud when reading but this book had me cackling…”

Morisano, ITPR’s co-founder, expressed his confidence in Marinelli by saying, “Leslie has the vision and the understanding of ITPR’s target demo to continue the foundation of success we have built over the last several years. I couldn’t be happier to see Leslie elevate this oh-so-worthy property and stage it for tremendous growth.”

Marinelli commented, “This is a dream come true for me. Having helped to create one of the more influential brands in the women’s online space has been both fulfilling and challenging. But I truly believe in the ITPR mission to provide a haven where women can really be ourselves and let our freak flags fly, and I’m passionate about helping other women achieve their writing and publishing goals. Stay tuned . . . the best is yet to come!”

Marinelli is currently overseeing a website redesign of InThePowderRoom.com where she will serve as the new CEO. She will also be releasing a second humor anthology, “How Can You Laugh at a Time Like This?” later this year.

Quit staring at my shuttlecock, ya perv.

Don’t look back? Don’t tell me what to do.