…and that’s why I don’t make handmade gifts anymore.

Once upon a time, I was a serial crafter.

I love making things. All kinds of things. Always have.

Earliest crafting memory? When I was about 7-years-old my mom signed me up for a Saturday morning holiday ornament class at the local craft store. I’ve been a craftaholic ever since.

Why, of course I still have those ornaments! Aren’t you adorable to ask! (#hoarder)

This first one was made from a tuna can. Honest to Pete. Nothing says “Welcome Baby Jesus!” like the lingering redolence of Chicken of the Sea… 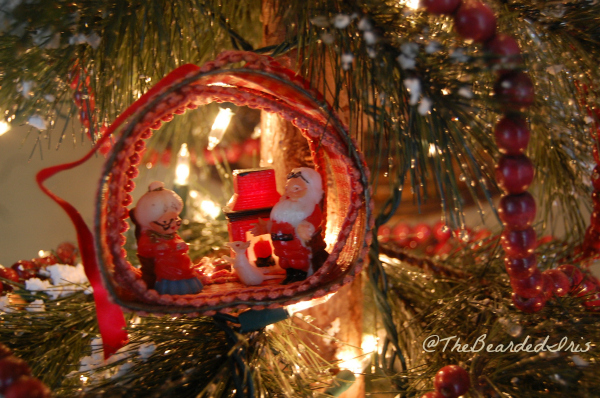 This next one is a wreath ornament made with the ancient pot-infused art of macramé, ever so popular in 1977. 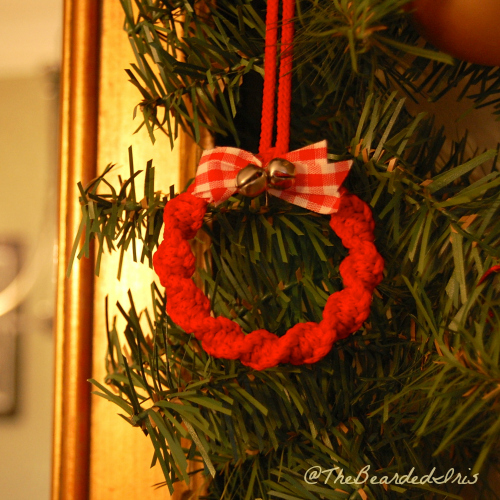 My mom would put on her Fleetwood Mac Rumours record and we’d knot our little hearts out together while my little brother and I snickered about the album cover. 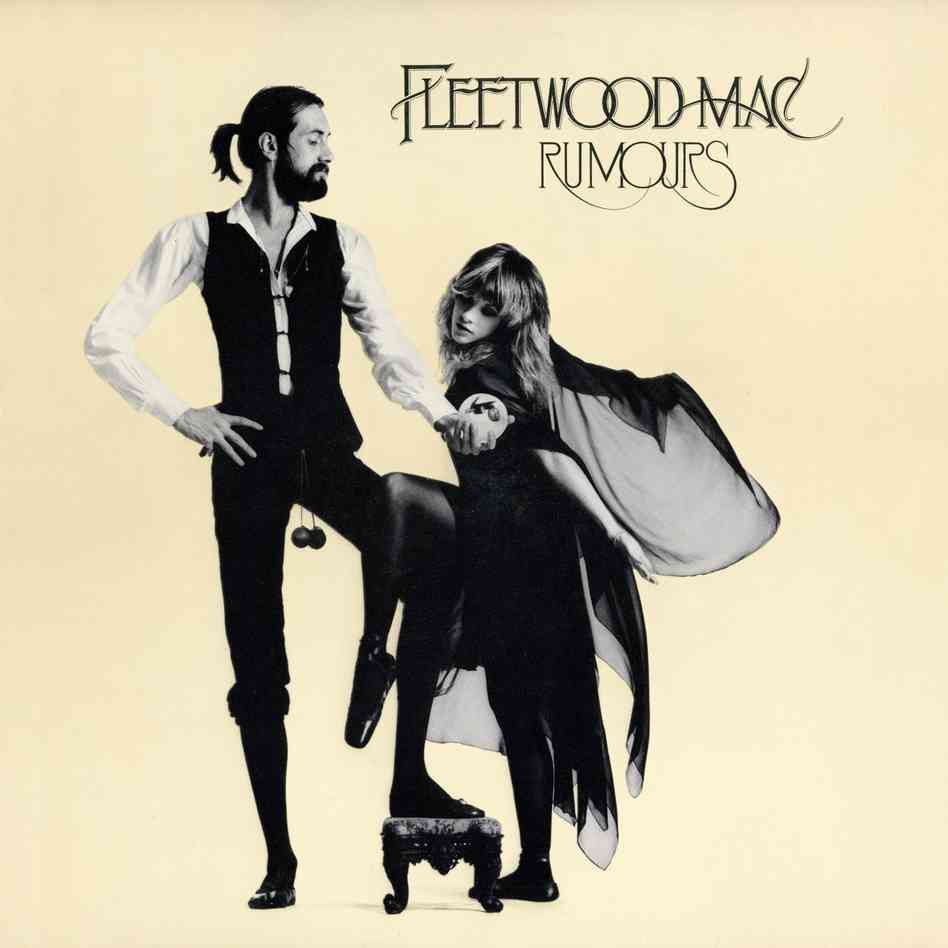 What the hell are those dangling things anyway? *snicker*

I loved making those macramé wreaths so much, I gave them as gifts to the whole family. Even twenty years later, when I was a newlywed, I made a set for my husband’s Aunt Ellen because she was a crafter and we connected on our mutual love of making things. Sadly, she passed away a couple of years later after a terrible bout with cancer. I still miss her.

Aunt Ellen was the kind of woman who really appreciated handmade gifts. She enjoyed my macramé wreath ornaments so much that I made her a beautiful quilted patchwork Christmas tree skirt the following year and she adored it.

Actually, I’m not sure if she loved those gifts as much as I think she did, or she just effused over them to make me feel good. It totally doesn’t matter. She made me feel loved and valued in a big loud Italian family where it’s hard to stand out. She was a good woman like that.

I realized this year as I was drooling over the thoughtful handmade gifts from (favorite) friends and family that I don’t really make handmade gifts anymore, and I feel a little sad about that.

But it’s also kind of funny… purely in a shit happens kind of way.

For instance, way back when I only had one child, I designed and made him this quilted Christmas stocking. He had a thing for dinosaurs; I’m pretty sure his first word was Micropachycephalosaurus. 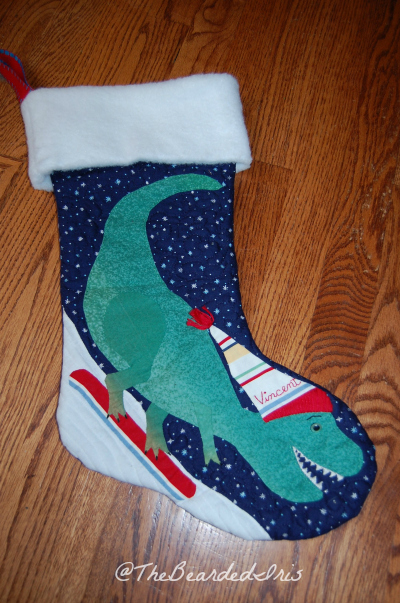 I mean, seriously. Look at the detail. 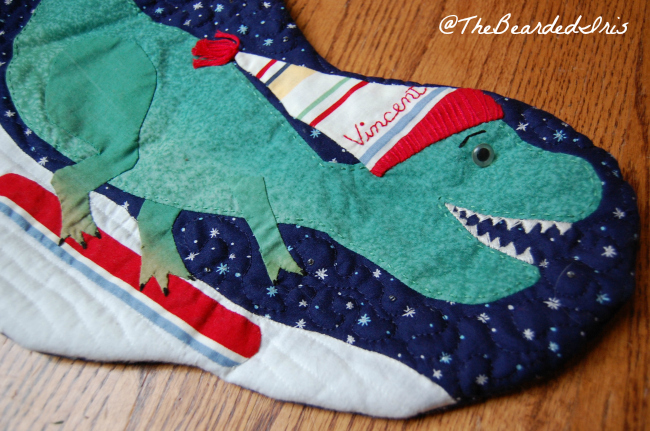 Then I had two more kids.

These are their stockings. 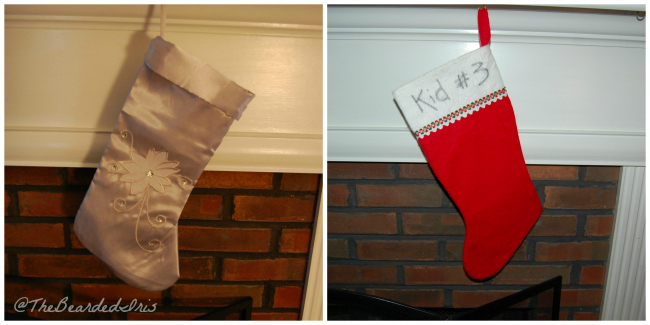 Sorry, younger kids. Mama doesn’t sew like she used to.

Actually, it’s kind of their fault—so sorry, not sorry. I had to box up my sewing/quilting supplies when Mini-Me was a preschooler. Have you met Mini-Me?

She used to sneak into my little makeshift sewing corner and pilfer things like scissors and pins and rotary razor cutting tools. Eight years later, I’m still finding straight pins and sewing needles all over the house. It was a hard decision, but ultimately my kids’ lives were slightly more important to me than my primal urge to make stuff. (But only slightly.)

Knitting was more portable, less dangerous (mostly), and way less messy. I got so into it that I started selling scarves. I even sold one at my gynecologist’s office to one of the nurses! A few years later, Bucket Head invited a friend from preschool over to play and when his mom arrived to pick him up, we stared at each other like, Gosh you look so familiar! How do I know you? Yep: scarf-buying-gyno-nurse. So funny… and also kind of awkward. I don’t always let my son’s friend’s mothers peer into my vagina, but when I do: RETAIL SALES OUT THE WAZOO! (See what I did there?)

I had a nice little cottage industry going there for a couple of years. But that was around the same time that people were buying those fuzzy machine-knit acrylic scarves for $5 on every corner, and it became harder and harder to sell my upscale handmade scarves that took hours and hours to make. Sometimes I spent more on the yarn than I felt comfortable charging for the scarf. I’m a great business woman that way. (Sheesh.)

Once Bucket Head arrived on the scene in 2007, I had even less time for crafting and switched from knitting to crochet. Smaller projects, only one needle… sometimes less really is more.

The following year I made these adorable little crocheted animals for the kids for Christmas. 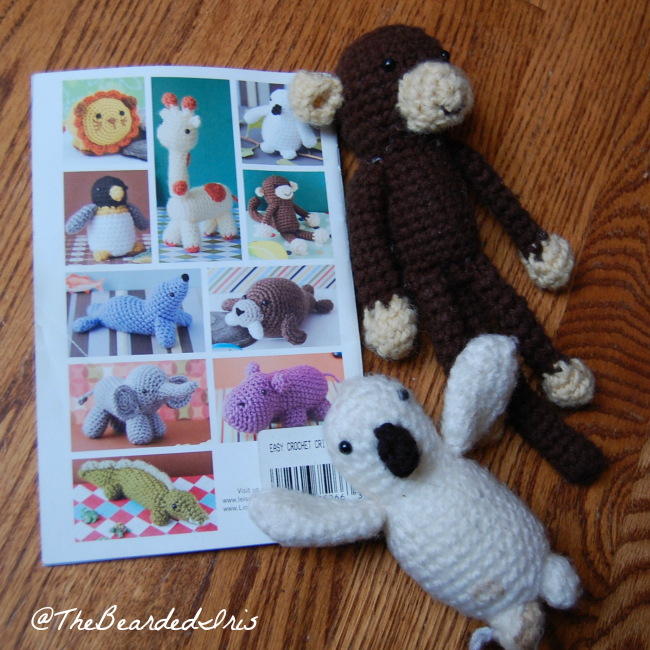 Ike ate one of their faces off. 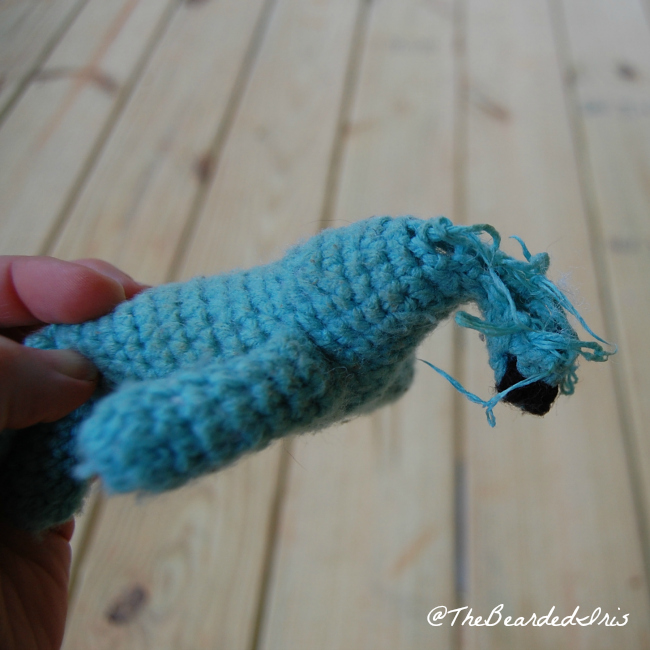 Ain’t nobody got time for that.

Another reason I don’t give handmade gifts anymore is that I’m way too needy. When I make something for someone, I require a lot of praise and gratitude. The year after I made that tree skirt for Aunt Ellen, my Mother-in-Law said she wanted one too, and I dutifully obliged. But a few years later, I stopped over at her house around the holidays and noticed a very plain store-bought green velour tree skirt under her tree.

“MOM! Where’s the handmade quilted tree skirt I gave you?!” I shrieked. (#classy)

“Oh that? I’m not using it this year. I got this one at Walmart. I just like to switch things up from time to time.”

And being the cool cucumber I am, I told her so.

The next year, my tree skirt was back…

Well-played, old woman. Well-played. Have I mentioned she’s Italian? I’m lucky I didn’t end up with a horse head between the sheets.

Truthfully, I was pretty hurt; but I also realized what an ass I was to have said anything in the first place, and I never said another word about it (to her). So she doesn’t like the fabrics I picked (which are fucking fabulous!), or the style of the tree skirt, or probably me in general. So what?! She’s in her 80s and probably doesn’t have that many Christmases left. She should be free to decorate the way she wants!

(But I do want that thing back someday, Angela!)

The whole experience was actually a huge a-ha moment for me about giving and receiving gifts. It perfectly illustrates the adage, “When you receive, never forget. When you give, never remember.” Deep, right? (Bonus: it applies to sex as well as holiday chatchkes.)

Unfortunately, I’m only good at forgetting important things and I hold a grudge like nobody’s business. So it’s really a blessing for all of us that my crafting days appear to be over… at least until I’m an empty nester with no pets or In-Laws.

And on that note, I hope you have a wonderful weekend full of whatever it is that brings you joy.

I’ll just be here, tenderly wrapping my tuna can ornament (not a euphemism) and making false promises to my two youngest children about the Christmas stockings I’m going to make for them… someday.

P.S. – Read more about Mini-Me and the infamous bubblegum story fabulously illustrated by my talented friend Amber a couple years ago. It’s one of my favorites!

Hey kids, don’t stick your tongues in there, m’kay?

Snowpocalypse, the State of Blogging, and Sausage Fest