I myself am a big fan, as you probably already know, based on the number of blog posts and now a bestselling short story I’ve written about my yaboes.

In fact, I interrupt this blog post for an important message: BREASTS ARE BEAUTIFUL. Big or small, (or in my case—one of each), old or new, shaken or stirred, boobs rock. And nobody, I mean NOBODY, can tell me otherwise.

Which is why I am so disturbed about women being told to stop breastfeeding in public.

The following is my opinion about breasts, nursing, and Chick-fil-A-Holes. Warning, there is bad language (from me) and shockingly offensive intolerance (from others). Read at your own risk.

And as a special party favor, please enjoy this lovely cleavage collage I made after attending BlogHer ’13. Are you one of the lovely ladies in this mam-tastic montage? 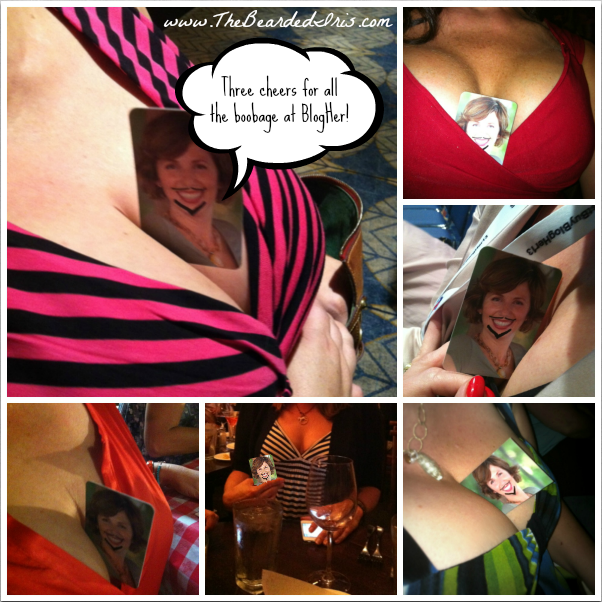 These People Do Not Want to See Our Boobs

by Leslie Marinelli, originally published In the Powder Room

Some people get offended when they get a little breast with their chicken sandwiches.

Boobies, hooters, jugs, tits, chesticles, sweater puppets . . . no matter what you call ’em, just don’t let them see the light of day in East Tennessee, particularly while the God-fearing patrons of Chick-fil-A® are scarfing down their family-friendly-fast-food.

Oh, haven’t you heard? Last week a mother was asked to stop breastfeeding her 5-month-old baby by a Chick-fil-A® manager who expressed concern that “other parents were afraid” of their children seeing the nursing mother’s uncovered breasts, according to an article on Yahoo! Shine.

Granted, this occurred in the heart of America’s Bible Belt, so part of me gets the whole regional “Thou shalt not whip out your nips” commandment. Or maybe it’s a local orthodox kosher law: never mix Chick-fil-A Waffle Potato Fries® and dairy . . . I’m not really sure.

But the part of that article that floored me the most was the overwhelming number of comments from the general American public about the importance of modesty. This wasn’t the typical breast vs. bottle debate. This was “Have some common courtesy, ladies! I don’t care what you do, as long as I don’t have to see it while I’m getting my Spicy Chicken Sandwich Combo on!”

Personally, I don’t think they’re concentrating hard enough on their meal if they’re rubbernecking for some titty peek-a-boo action in between bites.

Some of the commenters argued that breastfeeding should be done in private: “Just feed your baby before you leave home!” Oh, right, because THAT always works out. Let me get this straight, I take my three kids to a “family friendly” restaurant, and I should just let my baby shriek from hunger while he watches his big siblings chow down rather than offend your eyes with a possible glimpse of my Milk Duds? I bet if we put it to a vote the howling baby would rank as WAY MORE OFFENSIVE to most restaurant patrons than a nip slip.

Oh, but you’re fine with it as long as we cover ourselves?

Because in this nation where children play with dolls that look like they have pimps, and girls wear shorts so short they promise to make every cervix a star, and Anthony Weiner still exists—our breasts offend you?

I’m sorry, I’m just having a hard time wrapping my mind around this.

What about bikinis? And all the boob jobs? And the slow-motion Baywatch jog? And the prevalence of Hooters restaurants? And that Victoria chick and all her naughty, naughty secrets?

Hey, if you want to be offended in a Chick-fil-A®, be offended that their corporate president, Dan Cathy, supports the “biblical” definition of family and has donated millions of dollars to groups that oppose gay rights. Now THAT’S offensive.

And here’s another idea, you don’t want to see our fun bags? EAT YER FUCKING SANDWICH AND QUIT STARING AT THEM, PERV!

If you’re a breastfeeding mother who is sick and tired of people hassling you, this is one of my all-time favorite posts from In The Powder Room staff writer Kerry Rossow about her top comebacks for jerks who criticize public breastfeeding. My gift to you. Enjoy!

Do I have lipstick on my teeth?

Because Internet friendships are real, and so is cancer…