My husband hates my new knobs.

You guys? Can we talk about something kind of embarrassing?

I’ve been feeling really frumpy lately. Mainly, when I’m in the bathroom and I look down, I feel like my knobs just haven’t aged very well.

Back in the late 80s when they were shiny and new, they were pretty popular; I’m not going to lie. 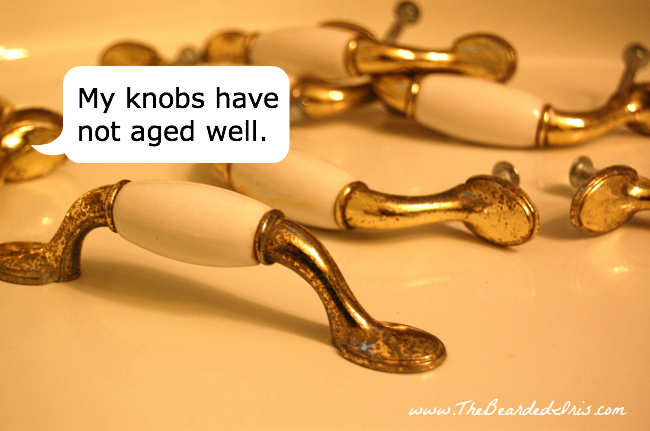 But twenty+ years of regular handling have obviously taken their toll, not to mention the excess moisture and occasional banging.

I just felt like my whole look was, well, dated and worn. I wanted to swap out my tarnished, lifeless old knobs for something shiny and new, like so many other women in my neighborhood have done lately. I know I should be happy with what I have, but I was coveting knobs that were perky and fresh! Something my husband and I wouldn’t mind grabbing several times a day.

So I saved up and bought a set of the prettiest knobs I could afford!

And that was not an easy feat because there are SO MANY CHOICES. Who knew?!

Not to mention the fact that my ADD prevented me from planning ahead and doing a special order of the knobs I really wanted. 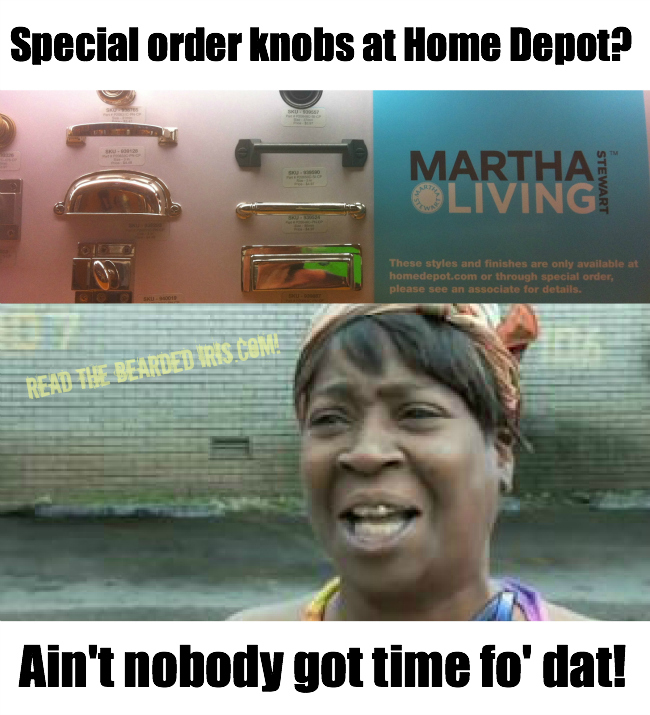 So I chose a set I thought would look good enough given my budget and time constraints, and I set to work.

As soon as they were on, I ran to show my husband. Would he like them too?

Sadly, his reaction was not at all what I expected.

“They’re bigger than I thought they would be,” he said.

“A little…yeah…they’re kind of awkward and lumpy. And they’re sort of hard to grasp too. I…I’m afraid I’ll break them.”

“Oh…well that sucks. I think they’re really pretty. You don’t like the way they feel? Seriously? Day-yum.”

“Let’s just live with them for a few days and then decide,” he suggested.

I felt shocked and crushed at the same time. In 15 years of marriage we had always managed to agree on matters of, uh…enhancements.

Honestly, I just assumed he’d like what I picked, but apparently he wanted something smaller, simpler, less showy.

A compromise was clearly in order. After all, to have and to hold, right?

So we took a few days to see if he would warm up to my new knobs.

And not only did he not come around, but over the course of those few days, I started to agree with him.

It pains me to say it, but he was right. When I looked at them with fresh eyes, those knobs were all wrong for the rest of my new look.

Maybe I should back up a bit and start at the beginning.

I’m obviously talking about cabinet knobs and pulls. What did you think I meant? Geez. Get your mind out of the gutter.

I’ve been s-l-o-w-l-y renovating our master bath over the course of the last…OMG…really? FOUR YEARS? Shit. (Oh so THAT is why people pay professionals.)

It’s been a long time since my last blog update about it when I swapped out the cultured marble counter top for a granite one, but only because I didn’t want to bore you to death. 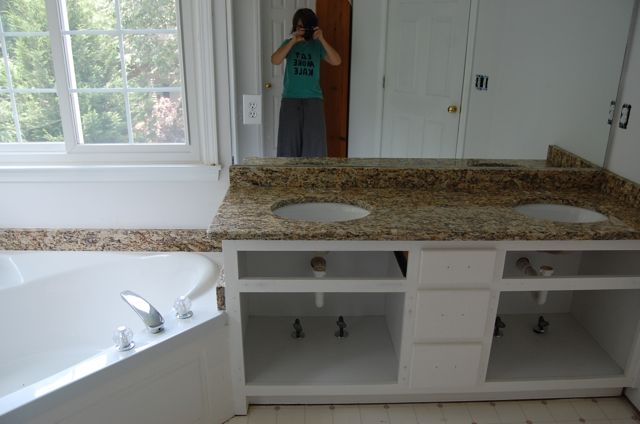 Since last June I have painted the walls (twice…because I hated the shiny satin finish the guy at the hardware store talked me into) and installed new faucets and drains (myself, thankyouverymuch), and my husband put in new light fixtures.

Then I tackled the vanity. Here is the original “before” shot just for funsies. 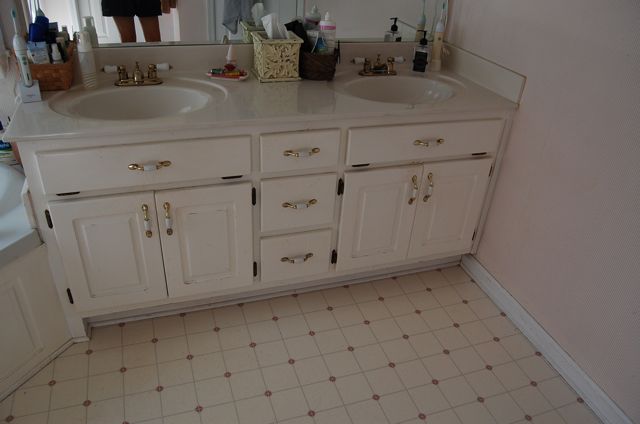 It’s one of those builder-grade dealios made from particle board and laminate…very shoddy quality, and very badly damaged by wear and tear.

I took all the doors and drawers off, sanded down the raised water-damaged areas, applied a primer, and then painted and waxed everything with Annie Sloan’s Chalk Paint (in Chateau Grey and Graphite) and Wax (clear and dark). It was a labor of love, let me tell you.

I’m not a painting expert and I don’t want to steer you wrong with how to use Annie Sloan products, so I won’t go into it here. Frankly I’m not even sure these products were the best choice for a bathroom, but only time will tell. I’m hoping that the primer plus the multiple (4) coats of paint and wax (3) will help protect them from water damage.

But here’s how it looked after the paint and wax, and while we were “trying on” the new Victorian glass knobs that we eventually rejected. That paint color on the walls is Celery Root (flat finish) by Valspar, by the way. I’m not sure if I love it or not yet. It’s more green than I thought it was going to be…I was hoping for more of a gray-green. (Also, ignore the floor…we’re not done.) 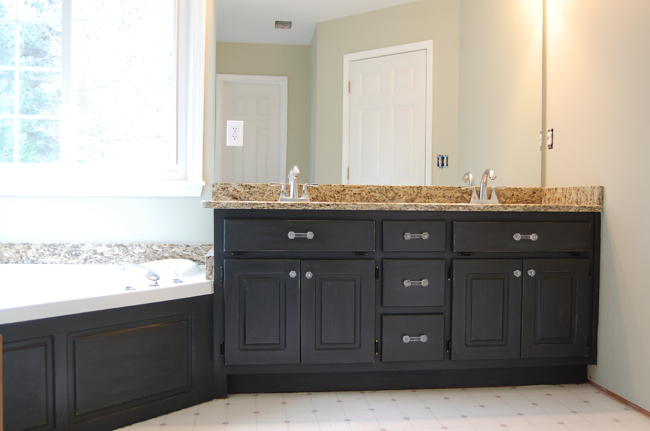 I also spray painted the cabinet door hinges with a flat black paint because the tarnished brass ones were killing my buzz.

In the end, we returned the big, lumpy, glass knobs and went with smaller chrome handles, to match the faucets and light fixtures. And here’s the big reveal (drum roll please)… 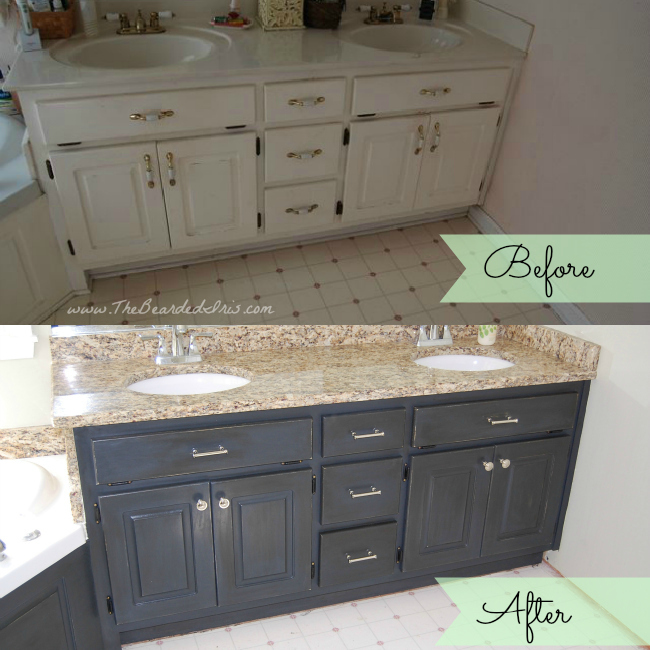 You know I’m not the best photographer, and the lighting is making the cabinet look more blue than it is in real life, so try to look past that if you can.

I think it’s pretty amazing what some primer, 4 coats of paint, 3 coats of wax, some new knobs, and bit of touch-up spray can do for a gal. Don’t you?

My husband sure likes the final look, although he did say, “Those knobs stick out kind of far, don’t you think?”

And that was the end of that.

Coming soon: a new floor and a toilet. Hopefully our marriage can survive it.

We all have that one friend…

Come to Mama Sausage Dip, for most of your bartering needs