Boobs, when bras attack, and Rob Delaney loves me

Last night two of my girlfriends and I went to see Rob Delaney perform in Atlanta. He’s a comedian I’ve come to know and love through his consistent hilarity on Twitter such as:

Just told my Secret Santa I murdered a plumber in Vermont in 1995 or is that not how it works?

Hey, if the mood’s right under the mistletoe, don’t be afraid to go in for a little mistlefinger.

The only thing we have to fear is fear itself. And vagina dentata. Also: sepsis. Beyond that we’re safe. Except for New Leprosy. #Wolves

And those are some of his cleaner Tweets, so don’t bother following him if you are *uncomfortable* with combos like filthy high chair straps and Mexican prostitutes. Trust me on this one. Personally, I think he’s magically delicious, but you know me; I’m not quite right in the head.

Also? I don’t mean to brag or anything, but Rob Delaney told me he loves me (and my raunchy friends). Kinda. So I’ve got that going for me. 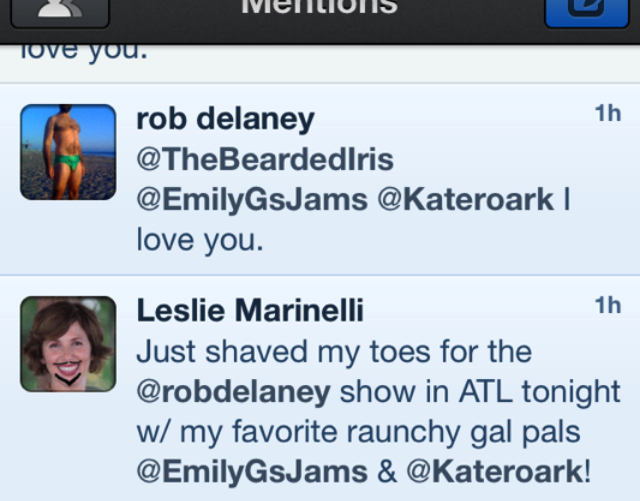 But when you’re a 42-year-old WAHM like me who doesn’t get out much, a Wednesday night out with the girls can be a real killer.

In fact, I woke up with a strange limp today. And the only explanation I can come up with is that I must have laughed so hard at the show last night that I injured myself.

You see, I don’t have one of those glorious out-loud laughs like some people. I’m more of a silent-but-deadly laugher. My friend Kate though, who was sitting on my left last night… she has one of those amazingly contagious hearty “guffaw” laughs. Her laughter actually turns heads and makes other people smile and laugh along. Comedians should pay her to sit in the audience; she is that good.

But me? Since my laughter is so quiet, I think I developed a tick as a child to slap myself in the leg repeatedly when something is really funny so people will see me and know I’m laughing along. That’s right folks. I’m a knee-slapper. A real-live-honest-to-God-knee-slapper. And I laughed so hard last night and slapped myself in the leg so many times that I injured myself.

And when you’re old, and tired, and injured, and super lazy, you tend to throw your clothes on your bedroom/desk chair at night instead of putting them where they belong. 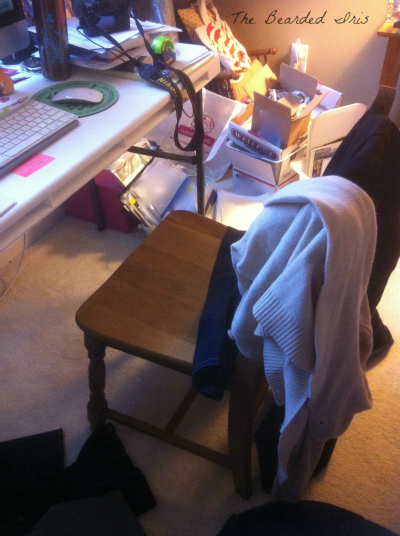 But this is (one of many reasons) why you shouldn’t do that: 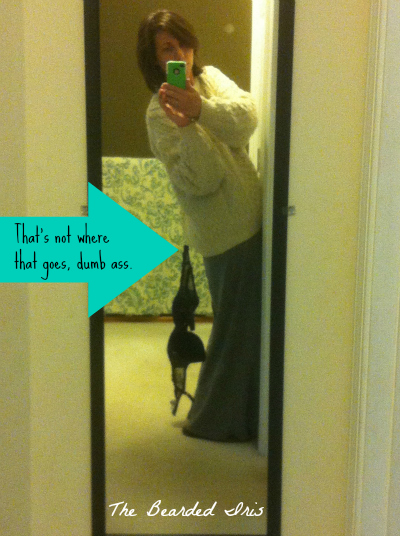 …stuck to the back of my sweater.

I got up from my desk this morning to get more coffee and when I walked by the mirror, out of the corner of my eye I noticed something long and black slinking behind me.

Y’all, it scared the bezeezus out of me.

For a second there, I thought a raccoon or a stray cat or something had snuck up behind me.

Thank God I was home alone because I’m pretty sure I shrieked a little. And then when I figured out it was just my bra from last night I was so relieved. That’s fucked up, right there. “Oh thank God that’s just a bra on my back and not a raccoon.” 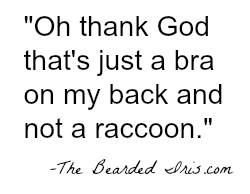 I can’t decide if the lesson here is that I should get out more or put more effort into putting my things away.

Regardless, I am just grateful I didn’t drive my kids to school this morning and walk them in to their classrooms. As if my kids need yet another reason to be embarrassed by their mom.

One last thing: some of my blogger friends and I have volunteered to be “big sisters” for some new(er) bloggers we know. I got paired up with a cutie-patootie named Stephanie of Binkies and Briefcases. I liked her right away because she has a tutorial on her blog for making Sweater Puppets.

As in, puppets…made out of recycled sweater sleeves. Duh.

Only, bless her heart, she didn’t know that the term “Sweater Puppets” is actually a euphemism for “boobs.”

Of course, as her official blogging big sister, I set her straight…eventually. Once I stopped laughing, that is.

Ironically, Stephanie has a really large pair of actual sweater puppets herself. In fact, she wrote a really funny letter to Santa about her fun-bags that I published for her today In The Powder Room. Whether you have boobs, wish you had boobs, or just enjoy boobs in general, there is something for everyone in her post today. Do yourself a favor and check it out.

Look what’s under the mistletoe!