We’ve all seen it a million times by now: people who hide behind the veil of technology and fire off nasty, rude, or judgmental comments via social media.

But there is something about Facebook in particular that seems to bring out the worst in some people.

I hearby christen them: Facebitches. 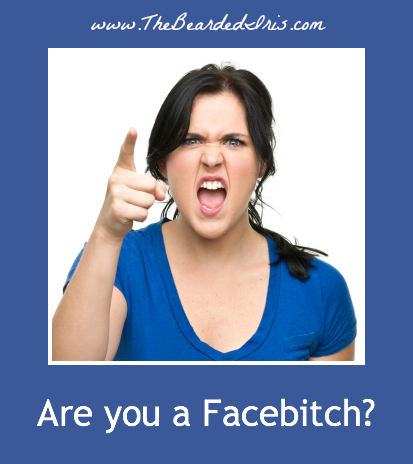 Yes, with the Back-to-School season upon us, I’ve been noticing an upsurge in mom-on-mom digital aggression. Apparently The Mommy Wars are alive and well on Facebook.

The Mother Superior. “That’s why I chose to homeschool/private school/public school, so my children won’t ever have to endure trauma like that.” How nice for you.

The Debbie Downer. “I’m sorry to hear about your child’s problems at school. My cousin had that . . . right before he took all those semi-automatic weapons up into that clock tower.” Thanks. I feel so much better now.

The Darwin Award Winner. “Thats not real. Them squirrels r totally photo-shopped into that toilet.” OMG, really? Like, duh. What gave it away? The Xs on the eyes?

The Turd in the Punchbowl. “That’s the least of your worries. The amount of hormones your children are ingesting through the water supply has already shortened their life span by decades.” Not helping. Shut the fuck up.

The Cat Lady. “This is what’s wrong with kids today. If I had kids, I’d . . . ” Bitch please. Try mothering a human child before you judge my parenting skills. Walk away before I kick you in the vagina.

And that’s just the tip of the iceberg.

Maybe it’s the act of communicating with typing fingers and thumbs instead of mouths and faces that creates this disconnect of civility, common sense, and respect.

Whatever the reason, I’m sick of it, and I’m In The Powder Room today giving some of these Facebitches a piece of my mind. Come on over and let’s show them how it’s done.

The Bearded Week in Review

Your ellipsis is showing