What drives a woman to kill her husband with a coffee mug?

I don’t watch a lot of news these days.

It’s a conscious choice. My soft little brain simply just cannot tolerate all the negativity and fear mongering. It brings me down. Big time.

So I go about my business most days, pretty oblivious about breaking news stories. It’s usually not until someone asks me point blank “Are you going to boycott Chick-Fil-A?” or “Can you believe that douche canoe said women can’t get pregnant if they are ‘legitimately’ raped?”

And then I usually go scrambling for the Google so I can at least marginally participate in all the pithy banter going on around me in cyberspace and the carpool line.

But as fate would have it, I was passing through the family room this morning while The Gatekeeper was watching the news and I couldn’t help but hear the tail-end of a story about a 70-year-old high-ranking umpire on the U.S. professional tennis circuit who allegedly bludgeoned her 82-year-old husband to death…with a coffee mug.

True story. Couldn’t make it up if I tried. Lois Goodman was arrested yesterday and charged with murder. She was in New York at the time to officiate the U.S. Open tennis matches.

There I was, eyes and ears riveted to the TV, standing behind the love seat, right next to my husband’s big bald head…and holding a coffee mug.

It was my second cup of French Roast and it was damn good.

He sensed me standing there behind him, holding that coffee mug, and looked over his shoulder at me like “Don’t even think it.”

But of course, I had already thought it! How could I not? I was holding a coffee mug.

It was like his big bald head had a red target on it.

Luckily for him, my cup was full and I have my priorities.

So instead, I just snickered and said a quick prayer that Lois gets a judge and jury of women who have been married for 50 years. 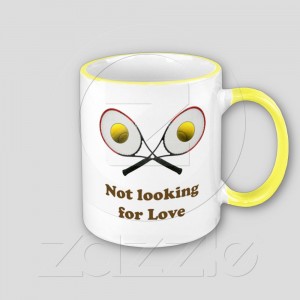 …to bludgeon her octogenarian husband…TO DEATH.

I’m just trying to imagine what led up to that ultimate moment when she snapped and decided that repeatedly bashing his liver-spotted melon with a coffee mug was the best course of action.

Him: “Hon, we’re out of Splenda again.”
Her: “OH SUCK IT, Alan. If you want Splenda, put it on the God damn grocery list. I’m not a fucking mind reader! No, you know what? Fuck that fucking shit. I’ve got your Splenda right here, Bub.” {WHACK WHACK WHACK.}

Him: “Wait, Lois, where are you going? You have another match today? I thought you were going to take me to get a hair cut at the Walmart.”
Her: “Hair cut? Jesus Christ, Alan. Didn’t we just get your hair cut two weeks ago? Ugh, I am so sick of being your damn taxi driver. You want a hair cut? YOU WANT A HAIR CUT?! I’ve got your hair cut right here, Bub!”  {WHACK WHACK WHACK.}

Him: “Lois, what’s a 5 letter word for bother?”
Her: “I’m trying to get out the door, Alan. I’m going to be late for my match. Get the Thesaurus, okay? I’ll call you later, bye.”
Him: “Oh fine. But could you please stop on the way home and pick me up some Metamucil? Oh and also, we’re out of Popsicles. I don’t like the generic ones. Get the real thing this time.”
Her:  {WHACK WHACK WHACK.}

or the most likely scenario:

Now where the hell is my husband going with all our coffee mugs?

Man, that was a really big wave.