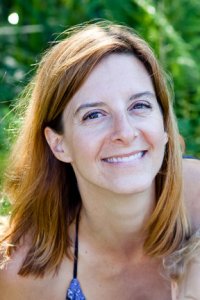 So I met this cool chick named Kristen McClusky a couple of weeks ago at the Erma Bombeck Writers’ Workshop and it was basically love at first sight. And not just because she has really pretty hands and lives not far from where I used to live in Oakland, California. Kristen writes a delightful blog called motherload: diary of a modern day housewife superhero. And it was after I read her About page that I knew I had to have a little piece of her (in a totally non creepy way) to share with all of you.

Well guess what? I networked! I sent her an email expressing my non-creepy love and asked her if she would pretty-please be my very first guest blogger.

And she said YES! OMG. I made a new friend…in real life. Somebody pinch me!

So without further ado, I present my new friend Kristen McClusky and her boobies…

My gay friend Rick thinks I have great tits. He admires them with the shameless gusto that only a guy with no interest in “going there” can.

I’d have slapped other men for saying even half of what Rick has said about my boobies. But with him? I’m flattered. I mean, Rick has exceptional taste.

Then one day while critiquing my shoes and cleavage, he asked me if my hooters were fake. And I was crushed.

Crushed because it was suddenly, painfully clear that when it comes to ta-tas, the man has no idea what he’s talking about.

I think my response went something like, “THESE?! These barely B cups? You think someone would PAY to have these droopy, nursed-two-babies, formerly not-even-that-fabulous boobies surgically constructed?”

After throwing back my head and laughing heartily, I tousled his hair and said, “Stick to what you know, honey.” Then walked away.

By the time you read this I’ll be in Miami at the Mom 2.0 Summit. A trip to Miami sends a clothing-careless Nor Cal mom like me into a fashion frenzy. My yoga-pants-and-flip-flops uniform will not carry over to the Versace Mansion (where I’m truly attending a party, thankyouverymuch).

So I’ve been shopping.

I had the good luck to find a few new fabulous frocks. But I’ve gotta say, my mommy mammaries are NOT doing them justice. I mean, especially in a strapless number. It’s one part engineering–needing to just hold the dress up–and one part aesthetics. Having more would just look better.

I needed bigger boobs in six days. So I went to Victoria’s Secret.

I was on the phone with my friend Meggie when I walked into the place. Which was good since it let me wave off the short, older woman with a tape measure around her neck who approached me. I know her type–the bra-fitting Nazi–all too well.

I had a Russian crone measure me for a nursing bra once and nearly needed therapy afterward. She hijacked me with her tape measure, stretching it over my chest in the middle of the store. She barked, “NO!” to the bras I’d picked out, yanked others off the rack, then marched into the small dressing room with me to try them on. She wrenched straps into place, and poked at puckering fabric as I stood terror-filled. And I don’t scare easy.

“This one good,” she snapped as I meekly tried to look at it in the mirror. “You get it.”

I left with three bras I was afraid not to buy.

At V’s Secret I found an apparently un-hostile saleswoman and quietly stammered, “I uh… need to buy some… boobies.”

“Built into the bra, or separate?” she enquired, as if she were asking, “Milk or sugar?”

“Uh… separate? I think?” I was doing that make-everything-a-question thing California girls do. Probably since I felt like a kid myself, looking to stuff my bra.

In the corner of the store she grabbed a pink and black box and pulled out a rose-colored satin pouch. From there she withdrew a semicircular, clear rubber blob.

As we both stared down at it, I wasn’t sure what to say.

In the dressing room I shoved the cool gel disks into my bra. There are actually two per boobie–one goes underneath for lift, and the other on top to flesh things out.

I took a picture of my curvy profile with my phone and texted it to Meg. (If you don’t have a girlfriend you can text tittie pics of yourself too, what have you got? If you need, I can send you Meg’s number. You’ll love her. Email me.)

She texted back her approval. And I was pleased too. For $59 this was a hell of a lot cheaper–and less messy–than surgery.

As I dropped the rubber falsies back in their sack I couldn’t help thinking about the single gals who use these things. I mean, for the unacquainted couple, they should be called Disappointment Disks. Sure, in the bar they look great, but back at your apartment how do you explain four rubber jellyfish flopping out onto the floor? Doesn’t seem so sexy after all.

At the register a middle-aged woman rang me up with a smile. “Love these,” she whispered.

I wondered what The Husband would think of them. Foolish or fabulous?

Whatever the case, when you finally get the rack you’ve wanted since you were 13, it’s not for your hubbie. It’s not even for the admiration of your fabulous gay friends.

No, these new boobies are all for me.

See? Didn’t I tell you? You can get more of Kristen (probably wearing her “Disappointment Disks”) at motherload, Twitter (@MotherLoadBlog), and Facebook.

Show her some love, y’all!