So, I’m going to ask Charles Dickens to help me pull it all together for your cultural edification, and also to class things up in huuuuur.

It was one of those March days when the sun shines hot and the wind blows cold: when it is summer in the light, and winter in the shade. ~Charles Dickens

On Monday I battled a recent ugly relapse into the depths of chronic depression when I accepted a dare by some of my blogging sistahs to showcase my hottest signature booty shaking moves on video. Score: Iris 1, Depression 0.

The response we all received was so incredible that we’ve decided to turn this into a monthly dance challenge. Look for more extreme hawtness and public displays of shamelessness coming to a monitor near you the first week of May. Interested in joining in on the fun? The more the merrier! Please contact Kerry @HouseTalkN to get the deets!

On Tuesday I was whining about how I’ve never been a bridesmaid and begging folks to consider me for future occasions. Several very awesome people including my blog crush Kristin from What She Said came forward and shared that they’ve also never been a bridesmaid. Oh thank GOD I’m not the only one! I’m also pretty confident that if I can convince several of my readers to tie the knot, they may actually ask me to stand up for them just because they know I’ll bring da funk, and possibly the pantsuit. Case in point:

@TheBeardedIris @inthepowderroom will you be my Maid of Honor? If I ever sucker the poor man into getting hitched? Dont tell @mellysteg

Oh snap! Sorry about that Melly, but I will cut you if you try to get between me and the Babzster.

Melly was ready to defend her turf though, and that bitch fights DIRTY:

But speaking of funk and pantsuits and female cage fighting, I answered several burning questions about my vintage getup on Wednesday…the same day the Top 25 Funny Moms contest ended, praise Jeeeezus. These vote-whoring contests are a bit of a soul-sucker, ain’t gonna lie. I wish there were an easier, more objective way to dole out the bling, but until someone invents a Funny-O-Meter, we’ll just have to rely on the popular vote. And lucky for me, you guys are über generous with your clicks and willingness to publicly support a hairy foul-mouthed suburban hostage with questionable feminine hygiene. God bless us, every one.

So yes, I’m more than a little pee-my-pants-excited to announce that I made the final list, and am now officially one of the Top 25 Funny Moms (#5 actually, but who’s counting). Which was a perfect way to end the day and usher in MY 42nd BIRTHDAY on Thursday.

And even though Facebook totally screwed me and decided not to tell you that it was my special day (possibly a user error, but whatever), I still had a great time filled with lots of love and sugary goodness, including a magical trip to my Holy of Holies: Krispy Kreme, where I was given a free birthday doughnut and enough hats for my whole family to celebrate in STYLE! 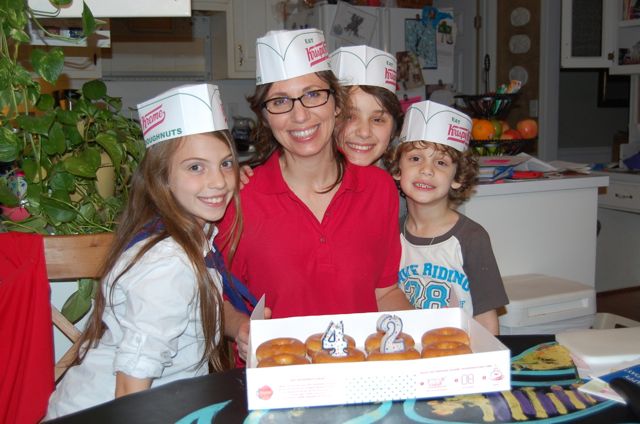 Special thanks to Chantelle at the Roswell Krispy Kreme who hooked me UP, y’all! On a scale of 1-10 for customer service, that woman deserves an 11 and a pink Cadillac, or golden doughnut, or whatever those Krazy Krispy Kreme Kohorts do to show their appreciation for their best peeps. Thank you Chantelle!

But every rose has it’s thorn. No, that one is not a Charles Dickens original, but a darn close second (I heart you Bret).

That same day, my husband took me out for a birthday lunch at The Olive Garden because he knows I’m a sucker for an all-you-can-eat soup and salad experience. We had the two cutest waiters who were in training and thus very attentive. Seriously, I could not take a sip from my water without the one standing there to replenish my glass. Which makes me feel compelled to apologize to that dear sweet girl for exposing her to my vile language during a rant in which I got very emotional about the Trayvon Martin murder in Florida.

My heart is broken in two for this child’s family. Self defense, my ass. That boy’s only crime was Walking While Black. 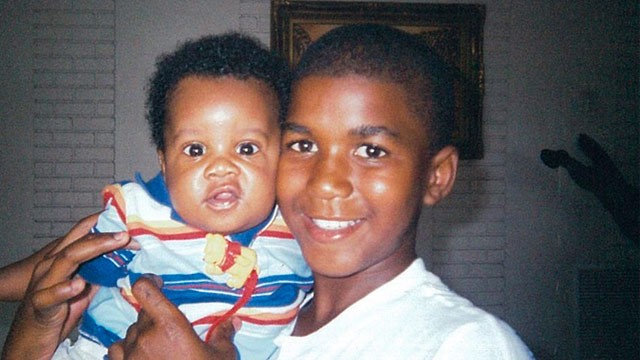 In the little world in which children have their existence, whosoever brings them up, there is nothing so finely perceived and so finely felt, as injustice. ~Charles Dickens

Marian Wright Edelman wrote an incredible piece about this tragedy earlier this week and I have not been able to think of much else since reading it.

But to end this roller coaster week on a positive note, I received the sweetest of birthday wishes from long time reader Meili:

Hope your joy today equals what you bring your readers every time you post one of your hilarious blog entries!!! I’m so glad you were born!

Meili, what a beautiful gift! I’ll take that over a dozen hot Krispy Kremes any day. But I think Charles Dickens said it best:

No one is useless in this world who lightens the burden of it to anyone else.

Thank you Meili, and all the friends I’ve made on the Interwebs, who make me feel so special and ease my burden daily with friendship, laughter, and love.

your older (and hopefully wiser) friend,

Have Pantsuit, Will Travel.

A Letter from My Future Self