FINALLY, my turn has come to take a ride on Ninja Mom’s Character Assassination Carousel and ruthlessly critique a classic children’s book. I’m following in the wickedly clever footsteps of Cathy, the very VERY busy mom, who recently ripped Corduroy a new one.

Yes, from the minute I first laid eyes on this tantalizing meme a couple of months ago I knew it was my destiny to participate!

Perhaps you recall this:

Why yes, that IS naked Satan giving Jesus a reach-around in my children’s Picture Bible. Good times.

The Bible is a tough act to follow though, let me tell you. I was kind of stumped coming up with another book to shred.

Desperate for ideas, I turned to a new friend, Rebecca* for help. (*Not her real name.)

Something you should know about Rebecca: she’s a really good mother. Watching her interact with children makes me want to give up my kids to her for adoption on the spot. Rebecca is also one of the most beautiful and serene women I’ve ever encountered. I’m pretty sure my blood pressure decreases simply by being in the same room with her. When she climaxes it probably sounds like a Tibetan Prayer Bowl.

I was kind of expecting her to say that she’s never met a children’s book she didn’t love. Or maybe that she doesn’t like certain fairy tales because of their blatant human rights violations.

But I was NOT expecting this: “Oh yes, we despise the Llama Llama series.”

“Well, there’s this scene in Llama Llama Red Pajama where the Mom yells at her child.”

“It’s awful. It’s about this little llama who has a hard time falling asleep. He keeps calling for his Mama, but she gets really annoyed and totally berates him! It’s really hard to watch. In fact the picture shows little Llama Llama shielding his own frightened stuffed animal from the mother’s rage. I got rid of the book or I’d show you. I just didn’t want my kids exposed to that kind of negativity.”

“Oh my God. It sounds dreadful!” 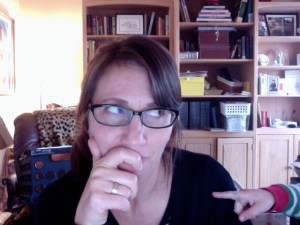 The next day, my kids and I hightailed it to our local library to find out more. 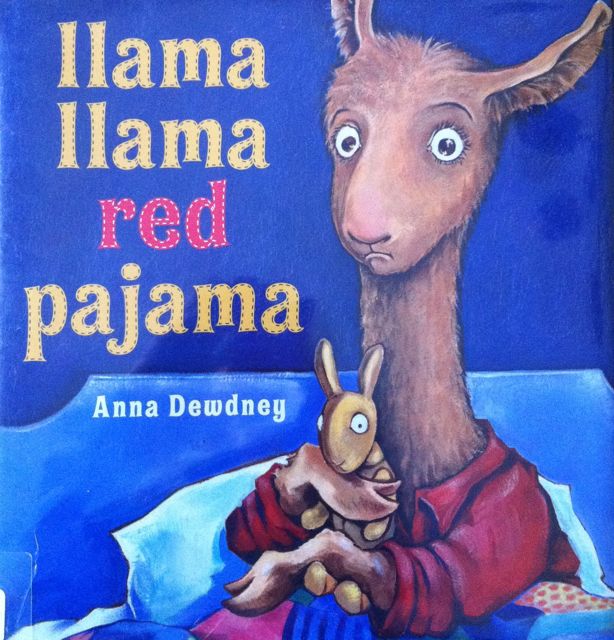 when my kids and I read the book?

We totally sided with THE MAMA!

Y’all, seriously, that little Llama Llama is an asshole.

If I was that Llama’s Mama, I’d be in prison by now with no chance of parole.

Even my children, who sometimes say things that make me empathize with wolf spiders, were like, “Mom, that kid sucks.”

“Please don’t say the word sucks. Say, ‘I don’t care for that kid’ or ‘that’s inappropriate behavior’,” I admonished.

“Well that Mama Llama needs to do a better job establishing rules and boundaries,” my twelve year old son stated with disdain.

I know. My kids are awesome. It’s true.

But how’d they come to this conclusion? Let’s break it down. 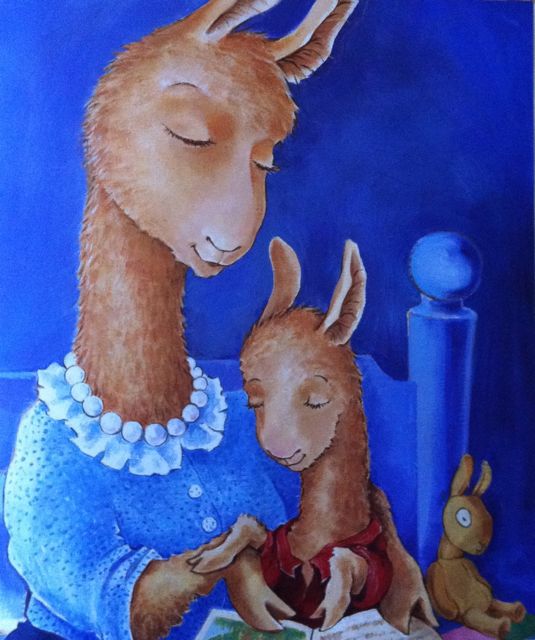 Boy, she looks like a real C U Next Tuesday, doesn’t she? Please note the creepy eyes on the little stuffed Llama on the side there. That’s important. We’ll address it in a moment.

This is my first problem.

Why is SHE doing the dishes?

Where the hell is Llama Llama’s Baby Daddy? Please tell me he cooked the dinner and is busy putting away the leftovers, because doing the kid’s bedtime AND the dishes is unfair division of labor if you ask me.

While Mama Llama is slaving away, little Llama Llama starts whining for her. He wants his Mama NOW.

Just then, the phone rings. (How is she holding that phone there, by the way?) 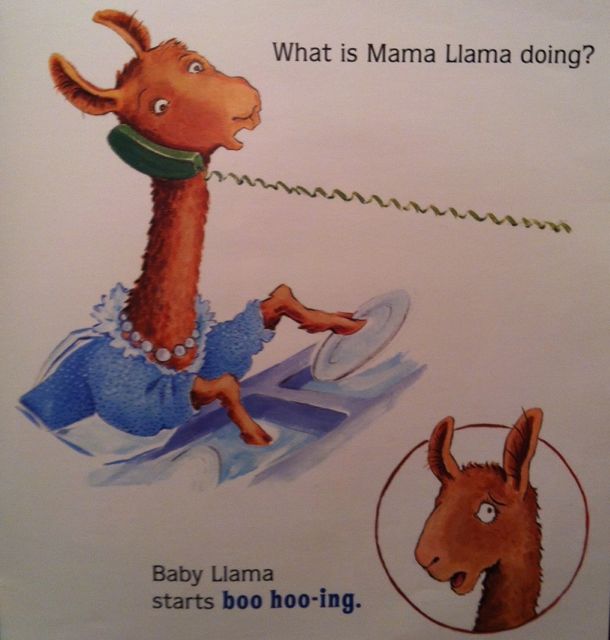 And you just know it’s probably the uptight director of the Little Llamas Preschool calling to tell Mama Llama that her kid is a biter.

Meanwhile, upstairs it sounds like an illegal exotic animals exhibit during a shooting spree. Here’s a sample of just SOME of his tantrum faces. Sheesh. 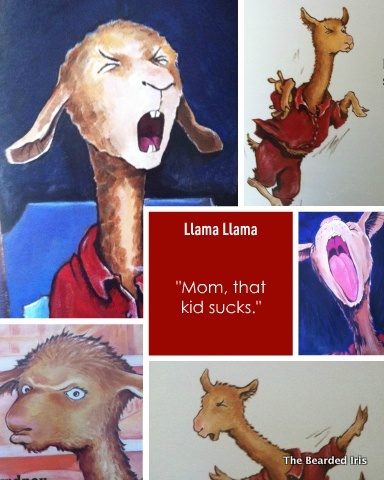 See what I mean? Holy guacamole, I really want to throat punch this little MFer.

Seriously. I’d rather listen to a continuous loop of the Vonage commercial song while watching someone set a compound fracture in a circus tent.

Naturally, by the time Mama finishes the kitchen clean up and dealing with the condescending preschool director who makes her feel like shit for breeding and raising such a “strong willed child,” she’s a little short-fused.

Can you blame her?

I mean really, she’s either a single mother or she’s married to a douchebag who is laying on the couch with one hand in his pants and the other in a bag of Lay’s® while she does EVERYTHING. And on top of it, her kid is a whiney pee-hole.

And no, this isn’t an isolated incident where little Llama Llama is just running a fever or had a bad day. He’s like this in EVERY Llama Llama book.

There is a scene in Llama Llama Mad at Mama where this kid throws a grocery store tantrum that makes Linda Blair in The Exorcist look like Shirley Temple. 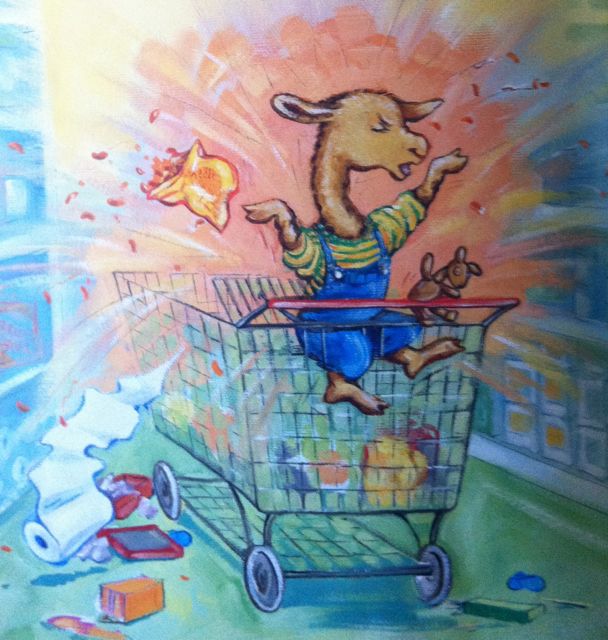 Uh, clean up in aisle 9. (As Mama Llama circles back for more wine and some extra strength Benedryl.)

As for that page in Llama Llama Red Pajama that so disturbed my new friend Rebecca? You know, the one where the child is shielding his lovey from his abusive mother? 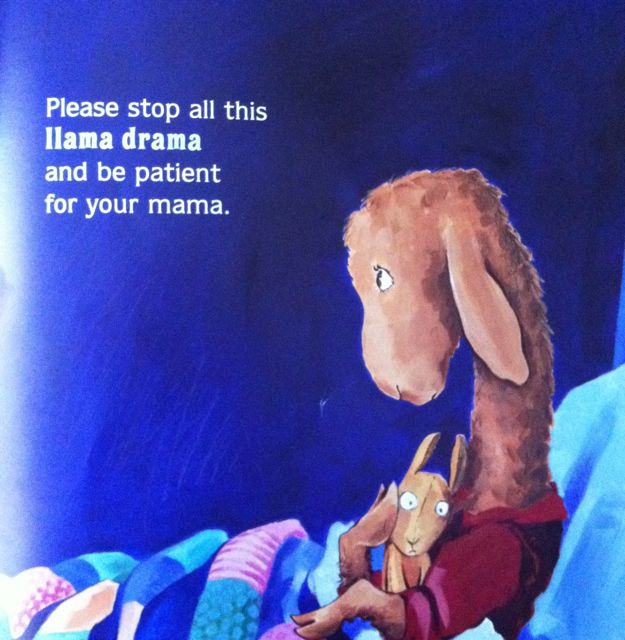 Okay, first of all, after all that ruckus, Mama Llama is totally justified to go in there and lay down the law. Secondly, is it really *that* abusive if she says “please” and phrases it in the positive? And thirdly, the supposedly traumatized stuffy? Bitch please, his little face looks like that ALL THE TIME: 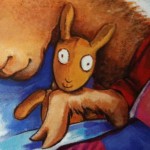 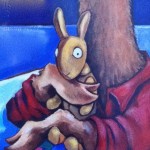 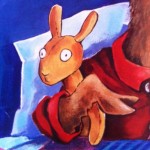 If anything, I’m interpreting that dazed and confused face as: “Woman, get me outta here! This obnoxious kid is driving me nuts!”

So yes, like my friend Rebecca, I totally despise these books too. And no, I don’t want this kind of negativity in my house either. My kids don’t need any additional bad examples.

Goodbye Llama Llama. I’m sending your deadbeat dad a copy of Go the F**k to Sleep to read to you while Mama Llama and I hit the bars. Salud!

There’s more where this came from. For the complete list of Character Assassinations, please visit Ninja Mom. Next up: the mucho snarkalicious Doc Cynicism. Hold onto your hats kids; it will be a doozy.

I get why some species eat their young: a tribute to WTF Tapas.

…and that’s how childhood trauma led to my bad ass DIY skills.