“Well, YOU’RE leaving skid marks,” I snapped back. “Pick up your feet!”

No, this is not boudoir dialogue.

This is what it sounds like when my 8 year old daughter Mini-Me and I go running together.

Okay, so we’ve only done it once. But that’s how it sounded, mixed with a lot of heavy breathing and the muffled slap-slap-slap of my ass cheeks on the backs of my thighs.

She’s part of a Girls on the Run program at her school and she’s training for her first 5K. Apparently, one of the tips she’s gleaned from her training is to not tighten your hands into fists while you run.

What Mini-Me hasn’t yet learned is to pick up her damn feet so she doesn’t sound like a little old man shuff-shuff-shuffling off to Buffalo. Drives me nuts!

Not that I’m a pro or anything. I only ran my first 5K about 18 months ago right around the time I reluctantly turned 40. But I do know enough about running basics and physics in general to know that dragging her feet will slow her down, tire her out, and ruin her shoes.

Of course, she’d rather fist a hemorrhoidal honey badger than listen to her Mama, but whatever.

Her coaches suggested that at least one parent from each family train with the girls as their “running buddy.” They encouraged us to sign up for the 5K run too.

Our race is scheduled for November 12th. That’s less than 4 weeks away. So now I’m in training. I’m doing the Couch to 5K running plan because that’s what I did before and it worked for me.

This time though, I jumped in at training week #5 instead of starting from the beginning. Doing things half-assed and without adequate preparation is pretty much how I roll.

And I have really good motivation: I definitely don’t want to embarrass my kid next month and be the one rickety mom hyperventilating on the sidelines, needing medical support.

I am a runner! 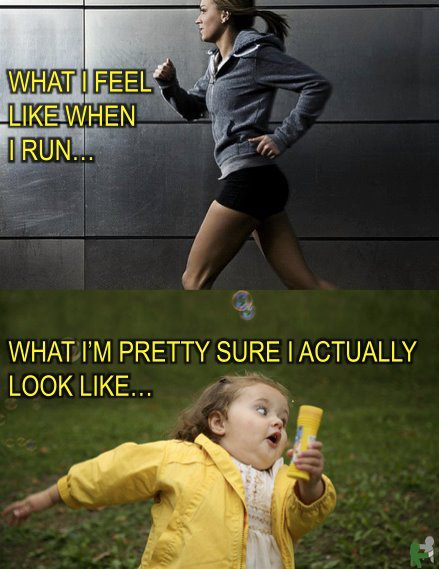 Hey, a gal can dream.

Got any great running (or parenting) tips for me? Leave me a comment and tell me what you know.

This Corn and Shrimp Chowder Soothes My Couponing Failure