I’ve said it before and I’ll say it again: I have man hands.

I get them from my Dad.

Look at those meathooks. And where the hell is his thumb in that picture? Youch.

There are some benefits to being well endowed in the hand department. I can palm a cantaloupe. When I grocery shop, I don’t need a cart. I can knead bread like nobody’s bidness. I wallpaper alone, with one hand tied behind my back.

As a busy house-frau/writer, I am constantly using my hands for things like cleaning up biohazards, massaging kale, and typing Hoo-Hoo-Haiku. Having pretty hands or nails isn’t a top priority for me; I don’t have the time, patience, energy, money, or desire to invest in that part of my body.

But I’ve always admired pretty hands/nails on other people and so two weeks ago when I took my daughter to my hometown for a girls’ weekend with my mom and aunts, I thought I would treat myself to a Gel Manicure and see what all the fuss is about.

I had never had one before, but my aunt, who has beautiful hands and fingernails, gets them all the time and said it was a great way to go. She encouraged me to get a French Gel Manicure like hers for a natural but polished and put-together look. And I thought, “when in Rome!” even though I was only in Pittsburgh.

It was a little scary. For starters, the dude doing me didn’t speakie English so good. We were having a hard time communicating about anything other than “pick you color.” And he totally didn’t get my jokes. I hate that. What is the point of having a stranger dig out your toe jam if you can’t enjoy a witty repartee about things like having some wine with my cheese?

Then, right before he started to apply the gel polish, he took a really big scary file and roughed up the top surface of my previously healthy nails. GULP! No going back now.

(Edited update: make sure you read Juanita’s awesome comments at the very end. She is a licensed manicurist and has shared some fantastic info about proper soak-off GEL manicures and nail salons in general!)

But several coats later and some time between coats with my fingers in a UV light box, and here’s what it looked like when he was done:

I could not have hated those nails more if they were applied to my face.

I seriously felt like I suddenly had ten thumbs. The nails themselves were so thick, especially at the tips because of their Frenchiness that my fingers were rendered totally useless.

Food in my teeth? Sorry, toots. Savin’ it for later, or until I can locate a toothpick.

Booger? Forgetaboutit. Not that I would EVER pick my nose (in public).

Wrapping a present for my cousin’s future bride? No can do. Anyone have a gift bag I can use?

And overall, it just wasn’t ME. I felt so weird with those shiny fancy thick fingernails! Like tits on a bull.

There was one good thing about those thick industrial strength nails though: pot scrubbing. I could scrape the scorched food stuck to the bottom of any pot like it was buttah.

And when I was gardening, I found that I could dig a hole just like a rabid Honey Badger! No shovel needed!

Of course, with all that pot scrubbing and bare-handed hole digging, my French Gel Manicure didn’t last very long (only about a week before it started to chip off at the base). And thank GOD for that. I couldn’t WAIT to get those things off.

Having already dropped my weekly grocery budget at the salon on two spa mani-pedis for me and my daughter, I decided I would figure out how to get those gel nails off by myself at home and save some moohlah.

And as luck would have it, I had all the supplies on hand: acetone, cotton pads, aluminum foil, and a cuticle stick.

In hindsight, definitely a mistake.

Although I’m normally a big fan of DIY tutorials, there is always an element of risk involved in doing something by yourself that one typically pays a professional to do.

Working with highly flammable and toxic chemicals is probably one of those things that should be reserved for the pros.

And I felt like an idiot sitting on my couch with my ten individually foil-wrapped fingers watching TV with my husband. 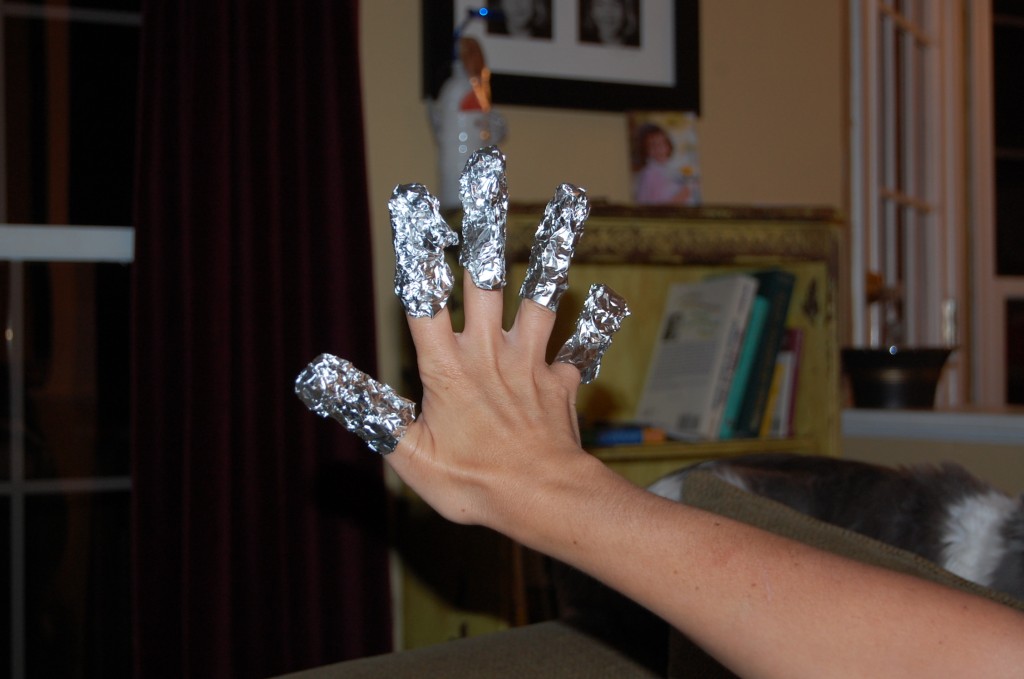 Although we did have better TV reception that night, ain’t gonna lie.

But it sure was hard to play my sixteen simultaneous Words with Friends games on my phone while I was waiting for those acetone soaked pads to do their magic in those little metal saunas. (FYI, “twat” IS a word.)

Don’t worry. I found a way to pass the time… 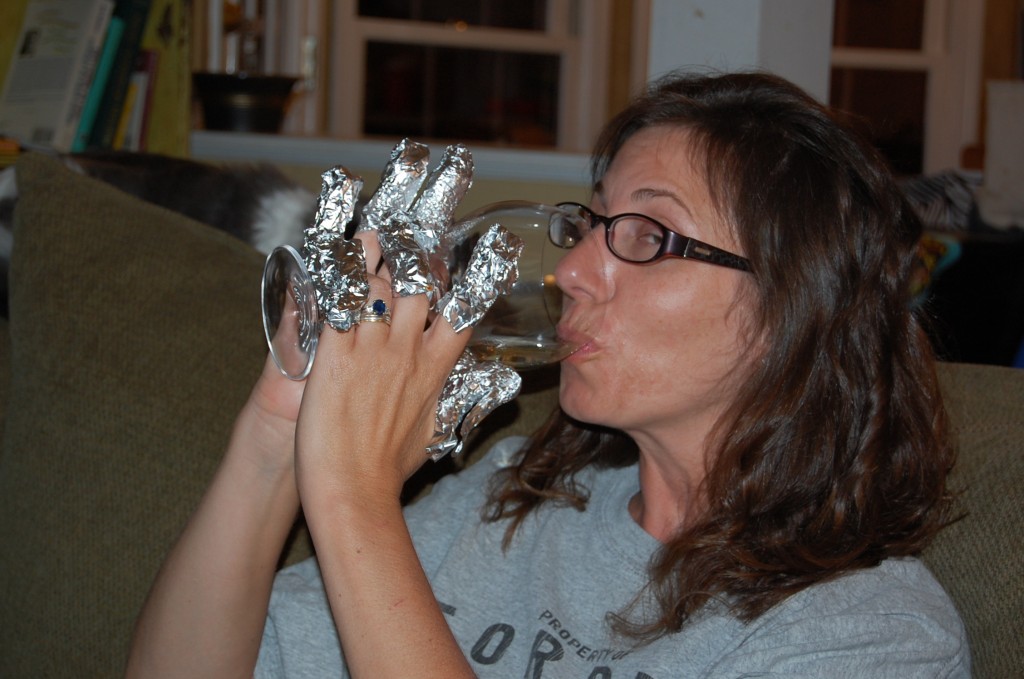 But I gotta tell you… I suspect that acetone is not very good for your skin. At one point in the process, I could feel each of my nail beds throbbing, and not in a good way. And they were hot! And when I finally pulled the foil tents off, the natural curve of my nail beds was totally exaggerated. Instead of a gentle ( curve, it was more like a C curve. FREAKY!!!! It eventually went back to normal, but still. That can’t be good.

And I must not have done the foil thing long enough, because the gel was not soft enough to scrape off.

So I did it again.

And it still didn’t work!

And after the second time I thought surely that YouTube bitch was just messing with me so I just poured some straight acetone into a bowl and soaked my hands. And even THEN it was a struggle to get those suckers off.

I ended up having to file and buff the remnants of that gel off my formerly decent (albeit big and manly) natural nails.

And now my fingernails are as soft and weak as cooked penne! Dammit! I had to cut them way back and hope that I didn’t do any permanent damage with that stupid little foray into fancytown. I don’t think I did.

So I learned my lesson. At least it was just fingernails.

Today is Tuesday, so if you’re here looking for one of my (in)famous “Just the Tip Tuesday” bits of advice take your pick:

1.) The phrases “When in Rome!” and “If so and so jumped off a bridge, would you?” are not interchangeable. Go to Rome, fine, just don’t jump off the bridge when you get there.

2.) There is nothing natural looking about a shiny thick bright white French manicure on hands that can manually juice a grapefruit.

3.) I’m not a fan of Gel (a.k.a. Shellac) Polish. And I’m guessing doctors aren’t either, particularly for long term use.

4.) …but if you get Gel Polish for a special occasion, have it professionally removed at a salon, unless you are a glutton for punishment, have an excess of free time, and a penchant for serving as a human antennae.

5.) An easier, more cost-effective way to feel like Ms. Fancy Hands is to buy a set of these: 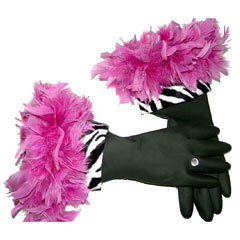 Feel free to buy me a set too: size EXTRA LARGE.

As if I needed one more reason to hate clutter.